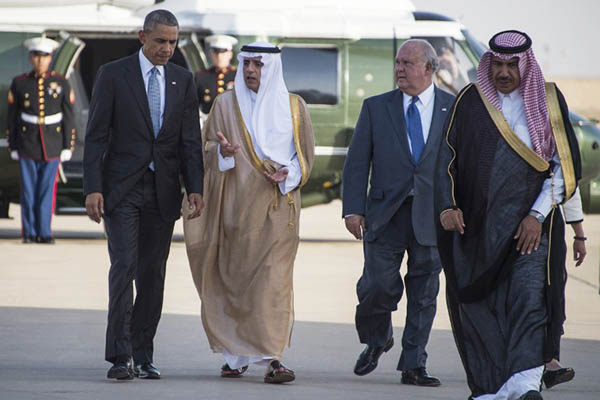 President Barack Obama said Thursday the United States is united with Gulf Arab nations in fighting the Islamic State group and sought to reassure them about U.S. overtures to regional rival Iran.

In Riyadh for talks hosted by Saudi Arabia, Obama said Washington still had “serious concerns” about Tehran, but insisted no country had an interest in conflict with the Shia power.

Obama, on likely his final presidential visit to America’s historic Gulf allies, was in Riyadh seeking to reduce tensions with the Sunni Arab states. With the I.S. jihadists suffering a series of recent setbacks in Syria and Iraq, Washington is seeking more help from the oil-rich Gulf monarchies to keep up the pressure.

Speaking at the close of the summit of the six-nation Gulf Cooperation Council, Obama played down any divisions and vowed continued cooperation in the battle against the extremists. “We remain united in our fight to destroy [I.S.],” he said, adding the U.S. “will continue to increase our security cooperation with our GCC partners.”

Saudi King Salman also spoke positively, stressing the GCC’s commitment to developing ties with the U.S. “in order to serve common interests and security and peace.”

Seated beside Salman inside a Riyadh royal palace, Obama said concerns remained about Iran’s “destabilizing activities” despite its landmark nuclear agreement with world powers and the lifting of sanctions. “Even with the nuclear deal we recognize collectively that we continue to have serious concerns about Iranian behavior,” Obama said. He warned, however, of the risk of confrontation with Tehran. “None of our nations have an interest in conflict with Iran,” Obama said.

Iran’s emergence from international isolation following the nuclear deal has worried the Gulf monarchies, which fear Tehran will be emboldened to seek a still bigger regional role. Gulf Arab states and Iran back opposing sides in a range of Middle East conflicts, including in Syria and Yemen.

Saudi Arabia and other Gulf states belong to the U.S.-led coalition that has been carrying out airstrikes against I.S. in Syria and Iraq since mid-2014. But U.S. officials have urged them do to more, especially to support Baghdad, which is battling political chaos and an economic crisis as well as the extremists.

Ben Rhodes, a close adviser to Obama, said there were “political steps that can be taken,” as Iraq would need assistance to hold on to and rebuild areas reclaimed from I.S.

Obama said a cessation of hostilities in Syria is “obviously under tremendous strain” as fighting has intensified in some areas despite efforts to hold peace talks in Geneva.

Washington hopes that in both Syria and Yemen—where a Saudi-led coalition launched airstrikes against Iran-backed rebels in March last year—an end to broader fighting can lead to a greater focus on the battle against I.S. and other jihadists.

U.N.-backed peace negotiations between Yemen’s warring sides started in Kuwait on Thursday, and Obama “urged all parties” to abide by a ceasefire that began on April 11. Jihadists, including the local branch of Al Qaeda, have exploited the Yemen conflict to strengthen their presence in the country’s south.

The diplomatic offensive followed months of rising tensions between the United States and the Gulf monarchies, which have for decades enjoyed strong security ties. Prince Turki al-Faisal, the kingdom’s former intelligence chief, told CNN that Obama’s conduct and declarations has made Saudi Arabia realize the relationship has changed. “My personal view is that America has changed,” he said.

The senior royal said the kingdom would have to “recalibrate” things such as “How far we can go with our dependence on America? How much can we rely on steadfastness from American leadership?”

In highly unusual moves, Saudi state news channel Al-Ekhbaria did not broadcast either the start or the summit meeting or Obama’s airport arrival on Wednesday.

At a news conference after the summit, Obama said talk of strains “was always overblown,” saying there were “tactical” differences on how to deal with Iran. Obama also told the summit that Washington and Gulf states would work together to lessen the impact of the dramatic fall in oil prices since early 2014.

The United States and GCC “will launch a new high-level economic dialogue with a focus on adjusting to lower oil prices, increasing our economic ties and supporting GCC reforms,” Obama said.

Saudi Arabia, the world’s biggest oil exporter, and its petroleum-rich neighbors have been forced to cut subsidies and adopt other measures to deal with deficits caused by plunging oil prices, which make up the bulk of their revenues.