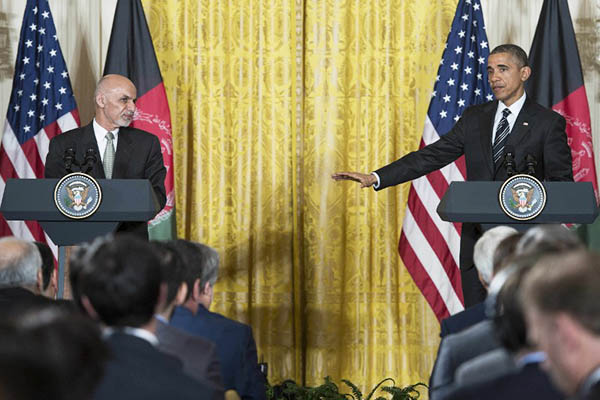 President Barack Obama on Tuesday reversed plans to withdraw about 5,000 U.S. troops from war-torn Afghanistan this year, an overture to the country’s new reform-minded leader.

Hosting Ashraf Ghani at the White House for a first presidential head-to-head, Obama agreed to keep the current level of 9,800 U.S. troops in Afghanistan until the end of 2015. “President Ghani had requested some flexibility on our drawdown timelines,” Obama said after an Oval Office meeting aimed at setting aside years of unease between Kabul and it nominal ally. Obama said a decision to meet Ghani’s request “reflects our reinvigorated partnership with Afghanistan.”

“We want to make sure that we’re doing everything we can to help Afghan security forces succeed.”

Ghani took charge six months ago after elections and protracted power-sharing negotiations. Since taking office he has embraced calls to tackle corruption and for Afghan forces to lead the fight against Taliban militants.

But last year’s April-October fighting season was one of the most bloody on record, exposing Afghans’ poor command, insufficient training and a lack of crucial equipment. Obama’s decision means 350,000 Afghan security personnel will have air and other key U.S. support through this year’s fighting season, which begins in weeks.

Katherine Blakeley, a defense policy analyst at the non-profit Center for American Progress in Washington, said Obama’s announcement would allow the U.S. to keep key bases open in Taliban-active areas like Jalalabad and Kandahar. “It’s very significant,” she said, adding it shows Afghan troops “they have our support, they are not going to be an easy target.”

Ghani vowed that the breathing space “will be used to accelerate reforms, to ensure that the Afghan National Security Forces are much better led, equipped, trained and are focused on the fundamental mission.” But it is a temporary reprieve. Obama indicated he intends to hold fast to a promise to withdraw almost all troops by 2017, when he is set to leave office.

A decision on 2016 troop levels will be made later this year. He also stressed that U.S. troops still in Afghanistan “are not on the frontlines because they’re not in a combat role,” as he praised the “courage and tenacity” of the much-maligned Afghan forces.

“As we’ve drawn down, they’ve stood up and they’re fighting,” he said. “They’re getting better month by month.”

As candidate and president, Obama has prioritized ending America’s longest war, which has been raging for more than 13 years and cost more than 2,200 American lives.

Ghani’s visit is designed to turn the page on years of distrust during the presidency of his mercurial predecessor Hamid Karzai. Karzai repeatedly criticized U.S. officials for what he called interference in his country, while aides in Washington privately raged that Karzai was feckless, paranoid and tolerant of corruption.

In a strikingly different approach, Ghani thanked U.S. troops for more than a decade of sacrifice since the 2001 toppling of a Taliban government by a U.S.-led invasion. “You stood shoulder to shoulder with us and I’d like to say thank you,” Ghani said hours after undertaking a deeply symbolic visit to Arlington National Cemetery. “The 2,215 Americans that have died must not die in vain. They must leave behind a legacy of a stable Afghanistan,” he said. “I would also like to thank the American taxpayer for his and her hard-earned dollars that has enabled us.”

“This is the right decision,” said Bob Corker, chairman of the Senate Foreign Relations Committee. “It should signal a continued flexibility based upon circumstances on the ground.”

Analysts say that flexibility may prove essential if fears about the Islamic State jihadist group establishing a presence in Afghanistan materialize. Critics accuse Obama of withdrawing troops from Iraq too quickly, allowing a power vacuum that was filled by the extremist group.