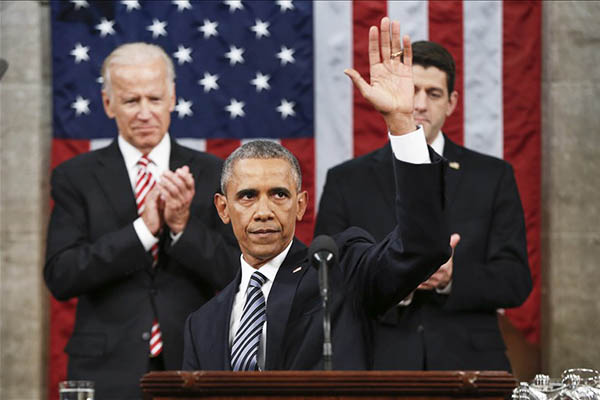 In farewell State of the Union address, U.S. president calls for cancer cure, shift away from non-renewable energy sources.

President Barack Obama told Americans nervous about terror and a changing economy that they should not fear the future, in a farewell State of the Union address on Tuesday that drew sharp contrast with Republicans.

In a primetime address that bubbled with 2016 election politics, Obama assailed Republicans for talking up the threat posed by the Islamic State group and talking down the American economy. A self-assured and optimistic Obama cast himself as the foil of foes who warn the country is going in the wrong direction because of his seven years in office.

Hailing an epoch of “extraordinary change” laden with risk and opportunity, Obama called for a new “moonshot” to cure cancer, a shift away from dirty energy to power the world’s biggest economy and for a thaw in the last remnants of the Cold War by ending the embargo on Cuba.

Obama insisted “America has been through big changes before,” as he took thinly veiled shots at Donald Trump, Ted Cruz and other leading Republican presidential candidates. “Each time, there have been those who told us to fear the future, who claimed we could slam the brakes on change, promising to restore past glory if we just got some group or idea that was threatening America under control. And each time, we overcame those fears.”

With less than three weeks until the Iowa caucuses—the first votes cast in the process to replace him—Obama berated Republican economic rhetoric, saying “anyone claiming that America’s economy is in decline is peddling fiction.”

But some of his toughest words were for Republican statements over the rise of the Islamic State group. He painted the jihadists as “masses of fighters on the back of pickup trucks, twisted souls plotting in apartments or garages.”

He admitted that the extremists, who have overrun large areas of Syria and Iraq, pose an “enormous danger,” but made clear: “They do not threaten our national existence.”

“Our answer needs to be more than tough talk or calls to carpet-bomb civilians. That may work as a TV sound bite, but it doesn’t pass muster on the world’s stage,” he said pointedly. “Over-the-top claims that this is World War III just play into their hands.”

And in a volley clearly aimed at Trump, Obama warned that “when politicians insult Muslims… that’s not telling it like it is. It’s just wrong. It diminishes us in the eyes of the world.”

The Republican frontrunner Trump was not impressed, describing the speech on Twitter as “really boring, slow, lethargic – very hard to watch!”

Tuesday’s address was arguably Obama’s last big opportunity to sway a national audience and frame the 2016 White House race. Around 30 million viewers were expected to watch live, a nationwide audience that may only be matched in political terms during the Democratic nominating convention later this year.

But it risked being overshadowed by news that 10 U.S. Navy personnel had been taken to an Iranian naval base in the Gulf. Senior U.S. officials said they had received assurances the crews would sail onwards come first light, but Republicans held up the crisis up as evidence that Obama was naive to engage Tehran.

Overall, it was an unorthodox speech that eschewed the typical laundry list of legislative priorities as Obama tried to lift the country’s gaze beyond the next year, and beyond his presidency. But he also tacitly, and explicitly, admitted mistakes.

There was no mention of the racial tensions that have dogged the tenure of the first black president. There was only a fleeting reference, and a symbolic empty seat in the chamber, to gun control and the awful toll of American gun violence.

Obama did take some blame for Washington’s hyper-partisan politics. “It’s one of the few regrets of my presidency—that the rancor and suspicion between the parties has gotten worse instead of better,” he said in a moment of personal candor. “There’s no doubt a president with the gifts of Lincoln or Roosevelt might have better bridged the divide, and I guarantee I’ll keep trying to be better so long as I hold this office.”

“As he enters his final year in office, many Americans are still feeling the squeeze of an economy too weak to raise income levels.” She also cited “chaotic unrest in many of our cities” and “the most dangerous terrorist threat our nation has seen since September 11.”

But Haley, the daughter of Indian immigrants, also jabbed at Trump over his views on immigration. “During anxious times, it can be tempting to follow the siren call of the angriest voices,” she said. “We must resist that temptation. No one who is willing to work hard, abide by our laws, and love our traditions should ever feel unwelcome in this country.”