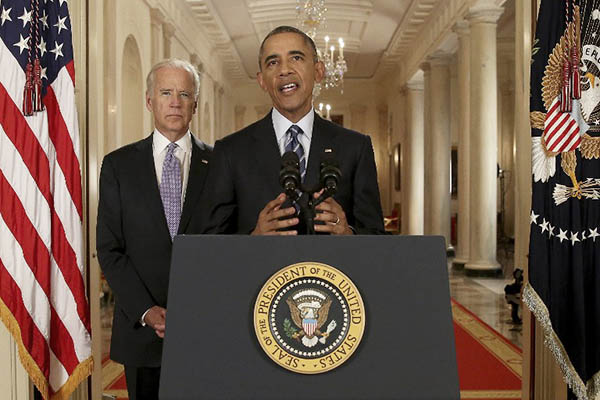 The nuclear deal with Iran has justified the U.S. president’s policy to seek dialogue—even with America’s perceived enemies.

When U.S. President Barack Obama accepted the Nobel Peace Prize early in his first term he acknowledged the controversy surrounding his win by saying he was only at the beginning of his “labors on the world stage.” Nearly six years later, having secured a landmark nuclear deal with Iran aimed at keeping Tehran from obtaining an atomic bomb, he has achieved a major diplomatic victory that forestalls a military conflict in an unstable region.

Of course, the deal has its detractors in the United States and abroad, from Israel to the Gulf monarchies. And even if a skeptical U.S. Congress approves the deal, it will be several years—long after Obama has left office in 18 months—before its real worth can be measured. But the 44th president can certainly see in it the tangible results of one of the main tenets of his foreign policy: dialogue, even with America’s enemies, must be given a chance.

“For 40 years our policy was to contain Iran, not to work and cooperate with it on any issue. That’s a fundamental departure in our policy,” said Aaron David Miller, a former State Department official who is now at the Wilson Center think tank. “Whether you are a fan or not a fan of this agreement, that is significant.”

In his Nobel acceptance speech in December 2009, Obama said it was vital to “balance isolation and engagement, pressure and incentives, so that human rights and dignity are advanced over time.” He drove home the point that “sanctions without outreach—condemnation without discussion—can carry forward only a crippling status quo.”

On Tuesday after the deal was announced Obama quoted John F. Kennedy—“Let us never negotiate out of fear, but let us never fear to negotiate”—to underline the power of diplomacy to make the world “safer and more secure.”

While his predecessor George W. Bush listed Iran as part of his infamous “Axis of Evil,” Obama chose the path of diplomatic engagement, even going so far in September 2013 to take what was for decades an unthinkable step—speaking by phone with his Iranian counterpart Hassan Rouhani. Thirty-five years after ties with the Islamic Republic were broken in the aftermath of the revolution and the hostage crisis at the U.S. embassy in Tehran, the two countries, along with several other world powers, sat down and hammered out a deal.

For Trita Parsi, at the National Iranian American Council, the agreement reached in Vienna to curb Tehran’s suspect nuclear program in exchange for sanctions relief “will undoubtedly be Obama’s biggest foreign policy achievement.”

“Cuba may have been closer to home for most Americans but Iran and preventing the path for a bomb there and changing the nature of that relationship is far more consequential geopolitically,” Parsi said.

In the short term, all eyes will be on the U.S. Congress. While lawmakers in Washington do not have to ratify the deal for it to take effect, they do have the power to block it.

Every vote counts: if Congress passes a resolution of disapproval in its 60-day review period, Obama could veto it. Overriding a veto requires the approval of two thirds of both houses of Congress. If Obama gets past the congressional roadblock, what place will the complex deal—the focus of bitter negotiations for nearly two years—have in the history books?

Some have said it would be comparable to the U.S. opening to China achieved in the 1970s by Republican president Richard Nixon, who made a historic visit to Beijing in February 1972. But the comparison is somewhat flawed, according to Miller.

“It’s a far cry from moving towards a normalized situation between the U.S. and Iran,” he said, recalling the numerous sources of tension in the region, including Iran’s support of the Assad regime in Syria, the Hezbollah movement in Lebanon and Houthi rebels in Yemen. Of course, it remains to be seen if any wider normalization of relations stems from the deal.

Obama is hopeful. “This deal offers an opportunity to move in a new direction. We should seize it,” he said Tuesday in his White House address.

For Suzanne Maloney, an Iran expert at the Brookings Institution, this “genuine breakthrough” resulting from rare “diplomatic energy” should be compared to the Cold War disarmament agreements reached with the Soviet Union, especially those finalized by Ronald Reagan. “They were strategic accords that helped manage the most dangerous aspects of an adversarial relationship,” Maloney told AFP.

Aware that his outreach to Iran is not universally popular, Obama is for now putting all of his weight, and his legacy, on the line. “This deal will have my name on it,” he said in late May. “Nobody has a bigger personal stake in making sure it delivers on its promise.”