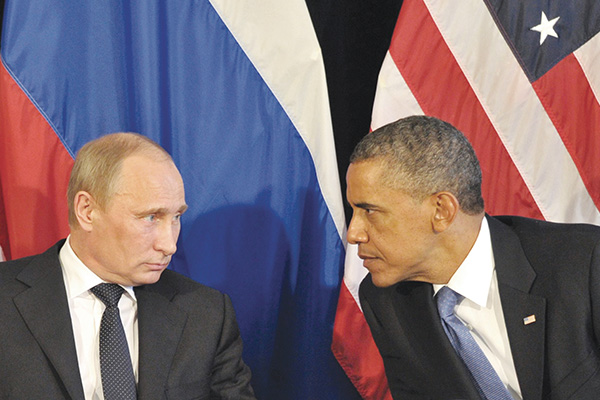 From Syria to nukes, Moscow just keeps getting in the way.

Presidents Obama and Putin will both attend a G8 summit in Northern Ireland, meeting at what is likely to be an ugly moment in U.S.-Russia relations. The day after the summit begins, the Nunn-Lugar deal—a partnership between the two countries from 1992 that helps safeguard Soviet-era nuclear and chemical ­weapons—is set to expire. The agreement, proposed at the end of the Cold War, was widely viewed as one of the most important arms-control deals in recent memory. But last fall, Putin’s government announced it would not extend the deal.

Then there is the vast divide between Obama and Putin on Syria. Obama called for Bashar al-Assad to step down two years ago; during this period, Putin has been funneling weapons to the Syrian dictator. Late last month, Assad said Russia had begun to ship an air-defense system known as the S-300 to Syria. Putin later clarified that though the contract had been signed, the weapons had yet to be shipped. Still, the gulf between Washington and Moscow on the Syrian civil war remains wide.

In 2009, Obama had tried to repair ties with Russia through an initiative he called “the reset.” To make the point that a new era in U.S.-Russia relations was dawning, Hillary Clinton, in her first visit to Moscow as secretary of State, brought along a large button emblazoned with what she believed was the Russian word for reset: “Peregruzka.”

“Peregruzka” actually means “overloaded.” Despite the gaffe, the policy did produce results at first. Russia dropped its objections to the American military resupplying the Afghanistan war effort through the Manas Air Base in Kyrgyzstan, a former Soviet republic and a country considered by Russia to be in its sphere of influence. The reset also resulted in a new nuclear-arms-reduction treaty and a promise from Moscow not to sell the S-300 air-defense system to Iran.

All these accomplishments, however, happened in 2009 and 2010 when Putin was Russia’s prime minister and the more powerful presidency was in the hands of Dmitry Medvedev, a moderate by comparison. Ever since Putin returned to the presidency in mid-2012, relations have seemed to be deteriorating.

When Obama meets with Putin in Northern Ireland, he will likely press him to continue to cooperate on securing Soviet-era weapons and to back away from his pledge to sell the S-300 to Syria. If he succeeds, perhaps it will signal a second reset of sorts. And if he doesn’t, it will be more evidence that U.S.-Russia relations are as overloaded with bad feelings as ever.