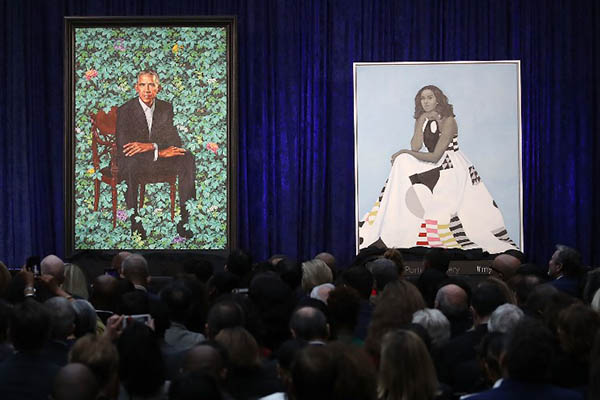 The paintings by Kehinde Wiley and Amy Sherald, commissioned by the National Portrait Gallery in Washington, were revealed at a star-studded event that is a rite of passage for most former American presidents.

The museum holds portraits of all American ex-commanders in chief, but these latest additions stand in stark contrast to the more buttoned-down approach of traditional presidential portraiture. Both show their subjects—America’s first black presidential couple—looking cool and confident, a stark contrast to the bubbling swamp of anger and braggadocio that is political Washington today.

Wiley painted the ex-president against a signature lush botanical backdrop.

Obama, in a serious seated pose at the edge of a wooden chair, is enmeshed in a thicket of leaves and flowers that recall the tropical hues of the 44th president’s home state of Hawaii. “How about that? That’s pretty sharp,” Obama joked, as he thanked staff and friends in attendance.

The internet quickly got busy making jokes about him being stuck in a bush.

Obama also praised Sherald for “so spectacularly capturing the grace and beauty and intelligence and charm and hotness of the woman that I love.”

The Baltimore-based artist rendered Michelle Obama in her trademark grayscale, with only a few splashes of coral, pink and yellow, against an eggshell blue backdrop. The resulting image makes the subject’s race almost an afterthought.

Obama’s dress—true to form for a first lady whose wardrobe was often the focus of attention—dominates the frame.

As in Sherald’s previous paintings of African American subjects, Michelle Obama appears poised and powerful as she looks down on the viewer.

Obama’s portrait will be hung alongside those of former presidents, including the Lansdowne portrait of George Washington by Gilbert Stuart. Michelle Obama’s likeness will hang at the gallery until November this year.

The official portraits of the Obamas, which will be displayed the White House, have not yet been commissioned.