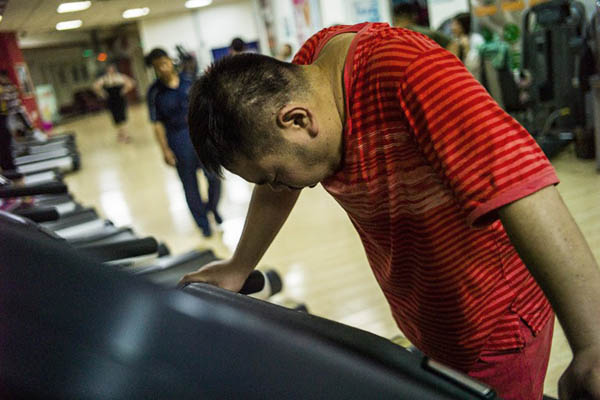 Researchers find overweight middle-aged people are more likely to have brains that appear a decade older than those of lean individuals.

The brains of middle-aged people who are overweight or obese show signs of accelerated ageing, according to a scientific study released on Thursday.

Levels of crucial white matter—connective tissue allowing different regions of the brain to communicate—were significantly lower in clinically overweight than in lean individuals, researchers found. By that measure, the brain of an overweight person aged 40 appeared to be a decade older, they reported in the journal Neurobiology of Ageing.

That 10-year gap remains constant over time as overweight or obese people age.

“As our brains age, they naturally shrink in size,” explained lead author Lisa Ronan, a scientist in the department of psychiatry at the University of Cambridge. People who are “overweight or obese have a greater reduction in the amount of white matter” compared to people of normal weight, she told AFP.

Currently, Ronan said, scientists can only speculate: Does being overweight cause the brain changes, or do low white matter levels cause weight gain? “It’s essential that we establish how these two factors might interact, since the consequences for health are potentially serious,” senior author Paul Fletcher, also from Cambridge, said in a statement.

Ronan and colleagues examined data from nearly 500 volunteers aged 20 to 87. Among those who were overweight, the disparity in white matter density only showed up from middle age onwards, suggesting our brains are more vulnerable later in life.

The diminished white matter did not correspond with a measurable gap in cognitive abilities or IQ between overweight and lean people, said the researchers.

“We don’t yet know the implications of these changes in brain structure,” said co-author Sadaf Farooqi, a professor at the Wellcome Trust–Medical Research Council Institute of Metabolic Science at Cambridge. “Clearly, this must be a starting point for us to explore in more depth the effects of weight, diet and exercise on the brain and memory.”

The criteria for “overweight” and “obese” are calculated as a ratio of height to weight known as the Body Mass Index (BMI). For the purposes of this study, overweight and obese were placed in a single category, and compared to people of normal weight.