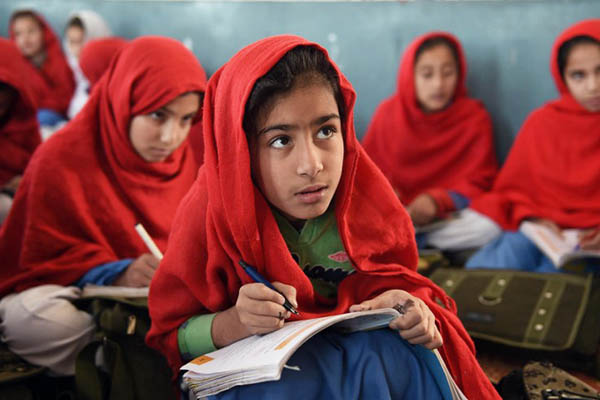 By throwing out English as a medium of instruction, Pakistan’s government risks damaging its own education reforms

Federal Minister of Education Shafqat Mahmood has announced the Imran Khan government’s resolve to introduce a Single National Curriculum (SNC) across Pakistan. In a recent TV appearance, he did not comment on what the SNC will achieve—which is always difficult when you discuss education—but was clear in his criticism of its opponents, deriding their “effete intellectualism” while stressing that its primary aim was to remove so-called “educational apartheid.”

Mahmood’s aim is to unite “a nation divided by perceptual walls” that is “unable to come up to many challenges that confront us including poverty, hunger and disease.” The crux of his uniformity-producing educational utopia lies in an undertaking to minimize the use of English: “English should be taught as a language, but all other subjects from grade 1 to 5 should be taught either in Urdu or in the mother language.” The minister suppressed a snicker when he conceded that only those whose mother tongue was English could have English as medium of instruction.

The real problem, which the minister didn’t highlight and which would make the removal of English as medium of instruction meaningless, are the 22.8 million children who don’t attend school at all. Representing around 44 percent of children aged 5-16, the task of securing education for nearly 23 million children has nothing to do with English. Pakistan spends 2.9 percent of its GDP on education and is haunted by “ghost schools” and absentee teachers who nonetheless draw salaries; meanwhile many schools lack running water or bathrooms, while provincial textbook boards produce books with more errors than information. And they are not in English, which is supposed to create “apartheid.” Some kind of “unmeasured” religious rift is also visible as the 40,000 madrassas in the country all belong to one of at least three internally conflicted sects.

Uniformity of mind is supposed to create “utopia” but ends up producing a brainwashed “dystopia” of an unproductive population given to intolerance of any variant points of view. Thinking of the past, ex-senator Farhatullah Babar writes: “By imposing uniformity, the state not only imposed Urdu on Bengalis but also imposed ‘parity’ formula to give equal political weight to the majority East Pakistan with the minority West Pakistan… Diversity of thought, of religion, of cultures, of languages is the soul of a federal structure. Crushing it will crush the soul of the state and society.”

In 1947, soon after the creation of Pakistan, the country’s first Education Ministry emphasized the teaching of the sciences, law and economics, whereas religious teaching was to be undertaken privately. In 1959, at the start of the Ayub Khan regime, the Commission on National Education suggested designing curricula “to focus on developing basic skills in reading, writing, and arithmetic, creating a high sense of patriotism as well as a liking for working with one’s own hand and additional subjects for specific vocations and careers.”

It is going to be self-damaging to throw English out as medium of instruction; Its logical-sequential discourse is needed by a people nurtured by religious sermons and a lot of folk and national poetry. If “rational thought” is the need of the hour in the face of “moon-sighting” ulema talking of jihad and 130 feet tall “young girls” created in the Hereafter for the pleasure of oversexed “good Muslims,” then Shafqat Mahmood is walking into a familiar wall. In Punjab, books have started being banned in anticipation; and “English-medium” schools have been instructed to remove a chapter on “reproduction” from textbooks and purge math books of “pictures of piglets.”

Article 22(1), today obsolete in the eyes of the “nazriati” (ideological) politicians, says: “No person attending any educational institution shall be required to receive religious instruction, or take part in any religious ceremony, or attend religious worship, if such instruction, ceremony of worship relates to a religion other than his own.”

This law implies that no lesson in any textbook that is compulsory to students of all faiths can contain material specific to any religion. The SNC violates this fundamental right of non-Muslim Pakistani citizens by prescribing lessons in Urdu and English courses that are already a part of the Islamiat curriculum. Urdu textbooks are asked to start with a hamd and a naat, and there is invariably a lesson on Seerat-un-Nabi or the life of Islam’s Prophet.

Dr. A.H. Nayyar points out what happens when this article is violated: “A lesson on Seerat-un-Nabi is prescribed in English textbooks of all grades. When challenged to justify this violation of constitutional right, the officials refused to correct the wrong. Instead they prescribed outlandish ways of avoiding the violation: they want teachers to ask non-Muslim students to leave the class during such lessons (and do what, they do not say). They also prescribe exempting non-Muslim students from answering examination questions relating to such lessons, a risk that few students would want to take since examiners could easily be prejudiced against non-Muslims. They keep insisting on retaining Islamiat lessons in compulsory courses in spite of the fact that these topics are already covered in the exclusive course on Islamiat.”

Does all this go back to our rejection of rationality? Paradoxically, our state philosopher Allama Iqbal himself appears to reject aql (reason) in favor of a supra-aql acceptance of Islam. This he did all the time in his poetry but it would be untrue to say that he did not do so as well in his lectures. In fact when you explore why he liked certain Western thinkers, you reach the conclusion that when not under poetic inspiration he wanted a blend of reason and revelation rather than pure reason. Today, we find Pakistani physicist Dr. Pervez Hoodbhoy arguing with the clergy (without much effect) in favor of the inclusion of science in Pakistan’s worldview.

The upshot of this is that we are able to deal with emotional moments with great ease. A man who restricts himself to reason will fare badly in such a situation. The unfortunate fact however is that a man who has rejected reason will fare badly when faced by a moment requiring rational thinking. Yet the emotional man has a kind of advantage over the rational man. He can approach a rational moment with emotion, but a rational man is helpless in the face of a highly charged emotional situation. All moments requiring a rational assessment can be confronted with high emotion (walwala). There are more tools available in Muslim societies for this walwala than in the West where reason has suppressed such collectively emotive concepts as nationalism.

What confronts us in the “uniform curriculum” being handed down by Prime Minister Imran Khan is removal from our children’s consciousness the vestiges of rational thinking embodied in the discourse of the English language. Here is how Dr. Hoodbhoy looks at our “science” books in an article published in 2016: “Local biology books are even more schizophrenic and confusing than the physics ones. A 10th-grade book starts off its section on ‘Life and its Origins’ unctuously quoting one religious verse after another. None of these verses hint towards evolution, and many Muslims believe that evolution is counter-religious. Then, suddenly, a full-page annotated chart hits you in the face. Stolen from some modern biology book written in some other part of the world, it depicts various living organisms evolving into apes and then into modern humans. Ouch!”