Of Mice and Mice 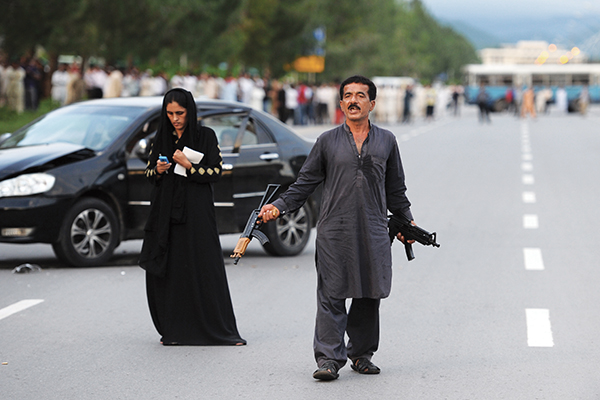 Interior minister Chaudhry Nisar Ali Khan says the order not to shoot Mohammad Sikandar was his and that the 51-year-old’s standoff near Parliament in Islamabad would have ended in minutes had the media not made a hero out of the unhinged man by providing him nonstop live coverage. The standoff ended up lasting almost six hours, winding down just shy of midnight on Aug. 15, and it had Pakistan’s hyperbolic cable news channels gripped. Most anchors were only too happy to screech out the asinine Pakistan-is-being-held-hostage line even though this was entirely untrue. Others were critical of Khan—who has repeatedly disavowed any direct responsibility for lawlessness in areas not under federal control—for failing to secure the federal capital’s most important artery. (Khan broke his silence 24 hours after the standoff started.) Sikandar, armed with two weapons and accompanied by his nonplussed wife and two small children, demanded a job at an embassy, the dissolution of the newly-elected government, Shariah. From the site of their siege, the couple gave media interviews and seemed to be enjoying the monsoon air while some policemen hid under cars and others simply waited it out. The standoff ended after a foolhardy member of the opposition PPP blustered his way through the cordon to intervene—almost getting himself, not least others, killed in the process.