Home Lightbox Of Smugglers and Kingpins

Of Smugglers and Kingpins 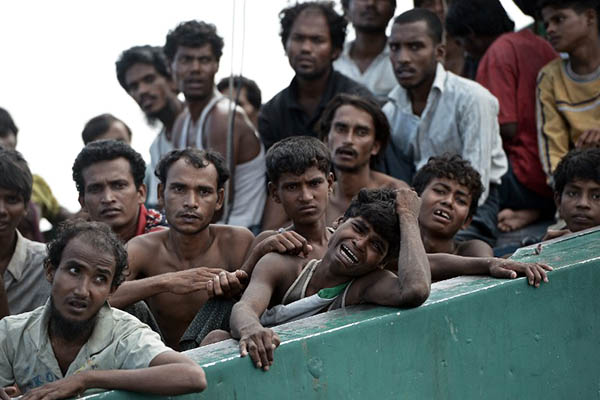 Around $1,100 should have secured passage for each of the Rohingya migrants who were found adrift in the Andaman Sea—victims of a dark trade in humans that pivots around smuggling kingpins in Thailand’s south.

From the heaving bow of a wooden boat packed with emaciated and bedraggled fellow Rohingya, Mohammad Salim, 30, said his brother had the 4,000 Malaysian ringgit demanded by the brokers—if he made it. “I haven’t paid anything yet… we just want to get to Malaysia,” he said.

As ruthless trafficking networks have splintered, the desperate migrants have been left weak and starving on board the boat, which AFP found several kilometers off the southern Thai island of Koh Lipe. Traffickers are also known to travel with the boats Provided with food and water, and its engine fixed, the boat left Thai waters early Friday, in line with the kingdom’s policy of stopping the migrants from settling in Thailand. Its location is now unknown.

The pay-on-arrival deal described by Salim is favored by some smuggling networks which start in western Myanmar—where the stateless Muslim Rohingya live in desperate conditions—and the adjacent poor coastal areas of Bangladesh. They reach hundreds of kilometers down to the Thai south and beyond.

In recent months, the gangs appear to have adjusted their tactics to offer cheap, or even free, sea transit south. Rights groups say the real money is made in southern Thailand, where brokers hold the human cargo in jungle camps or safe houses awaiting release payments of around $2,000 from relatives or friends, or sell them on in bulk to farms and businesses in Malaysia.

A boatload of 400 people—recruited, duped or even kidnapped—could be worth up to $800,000, according to anti-trafficking group Freeland Foundation, which has helped Thai police investigate the illicit industry.

Salim and his fellow passengers could not have known when they set out from Myanmar for Malaysia that the Thais were about to close many well-worn smuggling routes through their territory.

The belated crackdown, which has seen more than 60 arrest warrants issued and a similar number of police transferred, was sparked by the May 1 discovery of mass graves on a forested hillside straddling the Malaysian border. The move appears to have set off a chain reaction and traffickers have fled, abandoning migrants by the hundreds at sea or in jungle camps. As the remains of migrants were dug out from shallow graves in the full glare of the media, Thai police came under intense pressure to act. Thai officials have long been accused of turning a blind eye to human trafficking and even taking a cut from the lucrative trade. An influential former Satun province official, Pajjuban Aungkachotephan—better known as Ko Tong or ‘Big Brother Tong’—has fallen under suspicion.

Police are investigating whether Ko Tong ran a major smuggling route through a private island off Satun, onto the Thai mainland where the mass graves were found, and then into Malaysia. “Every big business has to go through his ears and eyes,” one businessman in Satun told AFP, requesting anonymity. “I don’t know if he was involved or not [in trafficking] but if anyone was doing something illegal, he would know,” he added.

National police chief Somyot Poompanmoung on Friday said Ko Tong, who is on the run, had contacted police with an offer to surrender as long as he received bail—a demand rejected as “unacceptable.”

Trafficking experts say Thailand is the center of a multi-million-dollar trade run by competing transnational criminal syndicates. “Most traffickers from Myanmar and Malaysia insist that Thai bosses are taking the lion’s share of the profits from this trade,” said Matthew Smith of advocacy group Fortify Rights. But the sums involved, which Smith puts at $250 million since 2012, means “layers of people” have got rich, with ample cash left over to grease palms where needed. The money trail reaches back to the poor departure countries.

In Myanmar’s Rakhine state, where 1.3 million Rohingya live stateless and unwelcome, tens of thousands have joined boats headed south, the majority since a wave of deadly communal violence in 2012. The U.N. says a record 25,000 Rohingya, and poor migrants from neighboring Bangladesh, took to the sea through the Bay of Bengal between January and March this year.

But the entire smuggling network has been jolted since the Thai grave find, which some observers link to the looming publication of U.S. rankings on trafficking. On May 8, in Bangladesh’s Cox’s Bazar region, where around 300,000 Rohingya refugees eke out a life alongside a huge number of poor Bangladeshis, three alleged people-smugglers were killed in a gunfight with police.

Among them was 55-year-old Dholu Hossain, who police believe to be responsible for smuggling more than 1,000 Bangladeshis on trawlers headed south for 20,000 Bangladeshi taka each. Sixteen brokers have also been detained since the Thai crackdown, according to Tofail Ahmed, a senior police official in Cox’s Bazar. “These brokers were previously boatmen and fishermen. But the ever-booming business of illegal migration turned them into human traffickers,” he said.

It is a recruitment process facilitated by a threadbare rule of law, desperation, poverty and greed—and it also sees some Rohingya brokers prey on the misery of their own people. “Many Rohingyas got involved with the business,” said Anwar Hossain, 25, who lives in the Kutupalong refugee camp in Cox’s Bazar. “How can you blame them? Jobs are scarce… there are hardly any other options to allow us to choose right from wrong,” he added.