Of Whataboutism and False Equivalence 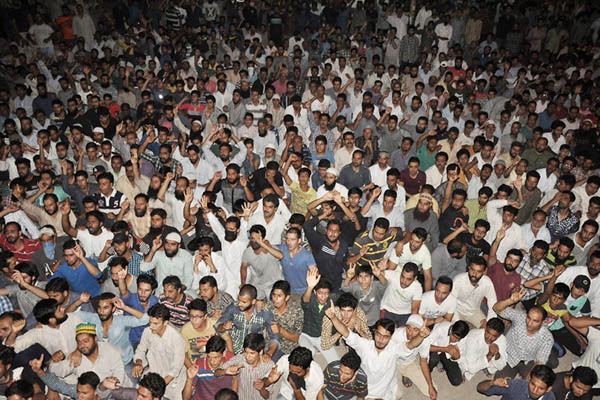 Kashmiris shout anti-India and pro-independence slogans at a funeral for a 16-year-old boy shot dead by security forces. AFP

India cannot distract from its atrocities in Kashmir by pointing fingers at Pakistan.

When India avoids talking Occupied Kashmir and refers to Balochistan, it wraps its whataboutism in false equivalence. Anyone who has studied Logic 101 knows what that means. That was the essence of Indian Prime Minister Narendra Modi’s speech on Aug. 15, from the ramparts of Delhi’s Red Fort, once the seat of Mughal power.

Modi didn’t have anything to say about what’s happening in Kashmir so he chose to talk Balochistan and Pakistan and ‘terrorism’.

There’s just a slight problem with that, though: Balochistan is not disputed territory. Kashmir is, and is recognized such by the United Nations.

There’s much else happening in India, in the northeast as well as the Red Corridor. But none of that concerns Pakistan, human rights abuses notwithstanding, because those parts belong to India. It is up to Indian rights groups to agitate those issues.

Kashmir, however, at this point belongs neither to India nor to Pakistan. It remains disputed. Here are some facts.

This is not even the tip of the iceberg. Remember also that these statements have come from pro-India elements and politicians. These are not the people who represent anything or anyone Kashmiri. But even they, being from Kashmir, realize that New Delhi has nothing viable to offer Kashmir and Kashmiris.

The difference between them and the Kashmiris who are protesting and who came for Wani’s funeral prayers, from everywhere, is that Wani represented a different aspiration, an aspiration that New Delhi-linked politicians know about but do not have the spine to voice.

When Pakistan voiced its concern, this is what the Ministry of External Affairs spox tweeted: “We have seen statements from Pakistan on the situation in Indian state of Jammu & Kashmir. They reflect Pakistan’s continued attachment to terrorism & its usage [sic!] as an instrument of state policy.”

Classic whataboutism if there ever were. But here’s the thing, India. If there weren’t constraints, every Azad Kashmiri would travel for every Kashmiri you martyr. Because, frankly, when all else fails, you have nothing else to rely on but coercion and brute force. That is when you are divested of everything and when even the most frail Kashmiri defeats you. You can physically oppress them but you can never subjugate the spirit. That is when, to quote Yeats, “A terrible beauty is born.”

Editor’s Note: At the author’s insistence, India-administered Kashmir has been cited as “Occupied Kashmir,” a term that this publication does not subscribe to. For purposes of objectivity, Newsweek Pakistan refers to the relevant sides of Kashmir as “Pakistan-administered” or “India-administered.”

1)You need to read UN resolution. Pakistan was the defaulter.
2) Kashmiri`s have participated in voting. 65 % voting is the answer of your question.
3) Read answer 2.. 65%!!!
4) Wani was a terrorist. Commander of Hizb Ul Mujahideen- terrorist organisation based in Pakistan. Syed Sallaudin is his leader (UN designated terriorist) who roams freely in Pakistan.
5.Atrocities against Kashmiri Pandits tops the list of 1990. Backed by Pakistan
6.doesn’t mean anything. I can give thousands of examples like from POK, Baluchistan, Gilgit, Karachi and from minorities…..
7. read 6
8.MC read 6
9.BC read 6
10 MC BC read 6
11. Pakistan is the one who bombs and use fighter planes on their own citizens.