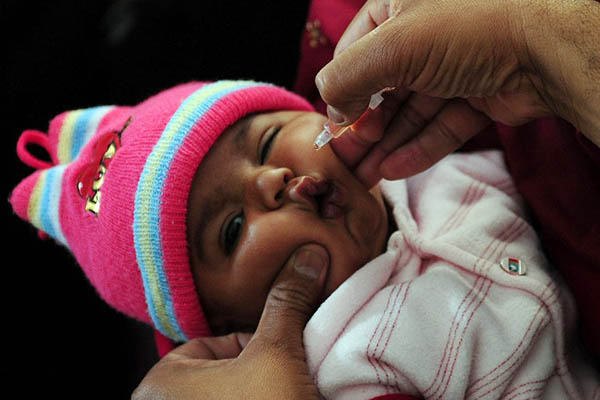 Health officials in Pakistan on Wednesday warned of a serious polio outbreak after the disease was detected in 16 children in a tribal district where militant groups have banned vaccination.

Pakistan is one of only three countries in the world where the highly infectious, crippling disease remains endemic. Infections shot up from a low of 28 in 2005 to almost 200 last year.

“Polio virus has been detected in 16 children since the Taliban ban,” said Jan. “We are waiting for the result of the stool samples of another 42 children suspected of having the disease.”

Local warlord Hafiz Gul Bahadur banned polio vaccinations in Waziristan in June 2012, alleging the campaign was a cover for espionage. Bahadur, who is allied with Afghan Taliban fighting U.S.-led troops across the border, said the ban would remain until the U.S. stops drone attacks in the tribal regions. North Waziristan has borne the brunt of the strikes.

Health officials said the disease is in danger of becoming an epidemic and voiced fears that it could spread to the neighboring districts if vaccination was not begun immediately.

“Every day we are receiving children with polio, we will have to start an anti-polio campaign, otherwise it’s becoming epidemic,” Jan said.

Most of the children affected were under five years old. Jan said nine cases were detected in Mir Ali town while seven were detected in Miranshah, the main town of North Waziristan. An administrative official in the area said efforts were underway to talk to militant groups and support from Islamic scholars had also been sought.

Officials said more than 240,000 children in North and South Waziristan were at risk due to the ban and have not been administered polio drops since the ban.

A World Health Organization official, speaking on condition of anonymity, confirmed: “Scores of polio cases have been reported in North Waziristan.”

“Several other children have also been paralyzed in North Waziristan but we are waiting for their test result as we don’t know what virus paralyzed them,” the official said.

What a disgusting record Pakistan is holding that it ‘hosts’ polio besides Afghanistan and Nigeria while it has been successfully eliminated from the rest of the world. We have to uproot it before it plays havoc with our future generations.