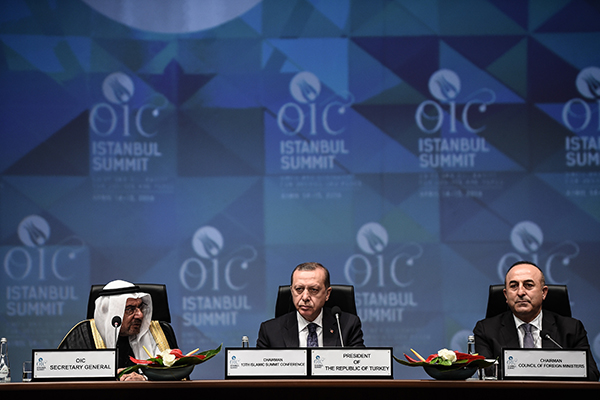 A press conference in Istanbul after the conclusion of the 13th OIC summit. Ozan Kose—AFP

The Organization of Islamic Cooperation warned on Monday that the travel ban imposed by U.S. President Donald Trump would strengthen the position of extremists worldwide.

“Such selective and discriminatory acts will only serve to embolden the radical narratives of extremists and will provide further fuel to the advocates of violence and terrorism,” said the OIC in a statement.

The 56-member organization urged the U.S. to reconsider its “blanket decision” and to “maintain its moral obligation to provide leadership and hope at a time of great uncertainty and unrest in the world.”

“As a result of this ban many of those fleeing war and persecution have been adversely and unjustly affected,” said the Jeddah-based organization.

An executive order signed by Trump on Friday suspended the arrival of all refugees for a minimum of 120 days, Syrian refugees indefinitely and bars citizens from Iran, Iraq, Libya, Somalia, Sudan, Syria and Yemen for 90 days.