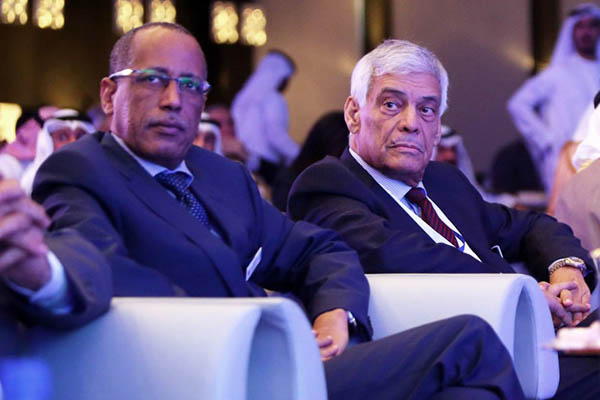 Gulf-based OPEC members are hitting back at shale producers by allowing oil prices to drop to record lows.

Gathered in Abu Dhabi for a key conference, senior energy officials from Arab Gulf nations insisted they would not cut production despite the persisting free fall in oil prices. A supply glut, lower demand and the stronger U.S. dollar have all contributed to pushing down oil prices, which have dropped nearly 50 percent since June to around $60 a barrel.

Experts say there is little doubt that OPEC is looking to drive new producers with higher costs—in particular North American shale ventures—out of the market. And how long the effort will continue is anyone’s guess.

“We have to wait and see if tight [shale] oil can continue” after the sharp fall in oil prices, Saudi Oil Minister Ali al-Naimi, whose country pumps a third of OPEC’s 30 million barrels per day output, told a conference session. “Things could need one year, two years or three. We don’t know what will happen in the future. What is certain however is that high-efficiency producers will rule the market in the future,” the Saudi minister said.

OPEC’s conventional producers, for decades part of an oil alliance that has dominated the global energy trade, have been feeling the pressure from the emergence of shale oil. Technological innovations have unlocked shale resources in North America and raised daily U.S. oil output by more than 40 percent since 2006, but at a production cost which can be three or four times that of extracting Middle Eastern oil.

For years OPEC has helped control oil prices by increasing or cutting production, but experts say it is now signaling that it won’t bear the burden for its competitors. Qatar energy minister Mohammed al-Sada told the conference that OPEC’s decision last month to stay firm on output was a “big game changer” for the global energy market.

“Cycles in our business are the norm,” Sada said. “The decline in oil prices will have a different behavior this time … The role of swing producer [like Saudi Arabia] could be changing from government control to market dynamics.”

OPEC seems determined not to interfere this time, even if the move to maintain output is hitting the pockets of some of its own members, like Nigeria and Venezuela, who have not built up the fiscal reserves of Gulf Arab nations. Some reports have suggested the Gulf Arab nations are also trying to put pressure on the economies of energy-dependent Russia or even fellow OPEC member Iran, but officials have denied any political motives.

Experts told the conference the next 12-18 months will be crucial for the global energy market and that there are few signs the price will rise. Weak demand in China—where the economy is slowing after decades of spectacular growth—is likely to continue, said Bassam Fattouh, director of the independent Oxford Institute for Energy Studies.

Competition for Asian markets has meanwhile grown, he said, after the production increase in the United States allowed it to reduce or stop crude imports from the Middle East, west Africa and Latin America. “That has created a shift in oil trade flows,” he said.

Other factors will help to keep prices low, he said, including the continued weakness of the global economy and potential output increases of around three million barrels per day if Libya, Iran and Iraq manage to restore or boost production. In the long run, he said, the next few years could consolidate shale oil producers—pushing the less competitive out of the market and strengthening those that remain. “Some bankruptcies are expected but the developments may still create a much more resilient sector.”