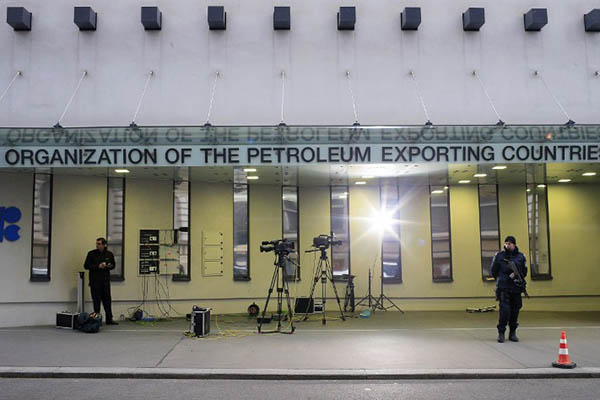 Oil tumbled to new multi-year lows in Asia on Monday, extending a sharp sell-off last week that came in response to OPEC’s decision to maintain crude output despite a supply glut and plunging prices.

“Negative actions in the oil market are continuing today. Investors see crude as remaining vulnerable after last week’s OPEC announcement,” said Michael McCarthy, chief market strategist at CMC Markets in Sydney. “We have not yet seen any piece of news or development that could trigger a bottoming out phase in oil prices,” he added.

The unabated price plunge comes after the 12-nation Organization of Petroleum Exporting Countries (OPEC) opted Thursday to keep its collective output ceiling at 30 million barrels per day, where it has stood for three years. OPEC ignored calls for a cut that have grown as an oversupply and weak demand have wiped more than a third off prices since June, with analysts warning of further falls to come.

The news dragged WTI down $7.54 in New York on Friday, compared with the settlement price on Wednesday, to end at $66.15 a barrel. U.S. floor trading was closed Thursday for a holiday. Brent had settled at $70.15 on Friday, down $2.43 from Thursday’s close.

OPEC has come under pressure from its poorer members, including Venezuela and Ecuador, to trim production as slumping prices have eaten into government revenues and raised fears over their economies. But the group’s powerful Gulf members, led by kingpin Saudi Arabia, resisted the calls unless they are guaranteed market share—particularly in the United States, where rising production of shale oil has contributed to the global glut.

The official purchasing managers’ index for the manufacturing sector in the world’s second-biggest economy skidded to an eight-month low of 50.3 in November, from 50.8 in October, the government said. It was the weakest reading since a similar 50.3 reading in March.

The index tracks manufacturing activity in China’s factories and workshops and is a closely watched indicator of the health of the economy. A reading above 50 indicates growth, while anything below points to contraction.