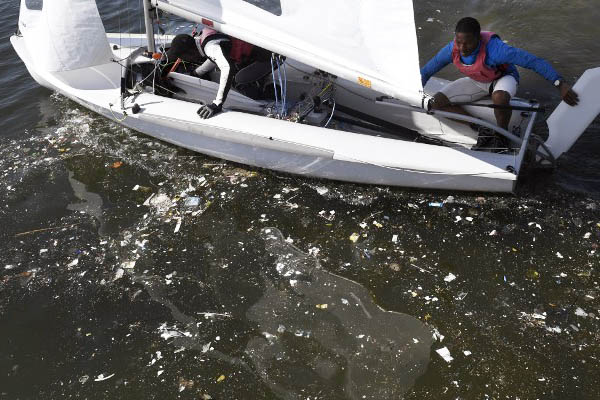 The main ramp used by Rio Olympic sailors was undergoing repairs on Monday after partly collapsing in bad weather, raising new concerns over the state of infrastructure for the Games.

The ramp in Marina da Gloria, the base for sailors and windsurfers, suffered serious damage on Saturday after days of high tides and rough seas. Workers were seen working on the site on Monday, with the clock ticking down to Friday’s start of the Games.

“It’s the widest ramp. They arrived yesterday with cranes to begin repairs,” said a Brazilian sailing team member, who asked not to be named. “My opinion is that it was badly built.”

Brazil’s Olympic committee chief, Carlos Nuzman, promised the ramp “will be repaired. That’s already happened at other Olympics.” But, adding to logistical complications, the stormy weather meant that catamarans and windsurfers that had been launching from a nearby beach would now also need to use the ramp in the marina.

For now, sailors are using a second, smaller ramp.

“It’s not a problem right now, but it would have been during the competition with everyone there,” Spain’s Nacra 17 trainer Santiago Lopez Vasquez said.

There has been criticism over the quality of construction at the Olympic Village, with emergency repairs needed to get many of the athletes’ apartments ready. Problems there included leaks, dangerous wiring and blocked toilets.

A television studio built on scenic Copacabana is also in trouble after waves ate into the beach, leaving the structure with little to protect it from the sea. An earthmover is working to move sand back into place.

For sailors, however, the biggest problem in Rio is heavily polluted water. The authorities’ promise to radically improve water quality in Guanabara Bay was abandoned. “Pollution is a big problem. You can find everything in the bay and it could have an impact on the results, slowing us down. It could be dangerous,” Lopez said.

Rain, which washes plastic and other garbage out of Rio’s rivers into the bay, would “make it worse,” he said. “If it doesn’t rain, it won’t be so serious.”