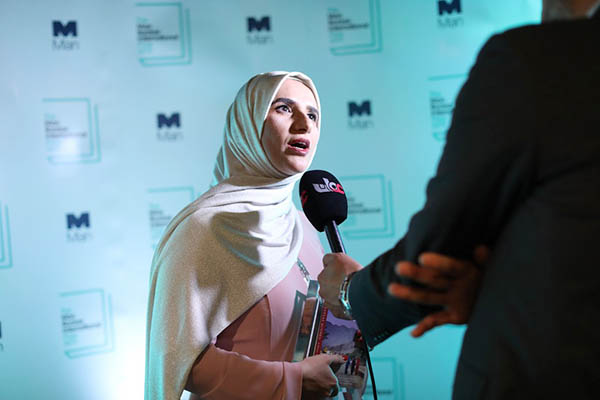 Omanis on Wednesday hailed writer Jokha Alharthi’s “historical achievement” and praised her for bringing “honor” to their Gulf nation after she became the first Arab author to win the Man Booker International prize.

“It is a huge historic achievement for the author, for Oman and for Arabic culture in general,” said Saif al-Rahbi, an Omani poet, essayist and writer. “It shows that Omani literature is moving along,” he told AFP.

Alharthi, 40, received the prestigious prize during a ceremony on Tuesday in London for her novel Celestial Bodies, which depicts life in her small Gulf nation.

The £50,000 Man Booker International prize celebrates translated fiction from around the world and is divided equally between the author and the translator.

The judges said Celestial Bodies was “a richly imagined, engaging and poetic insight into a society in transition and into lives previously obscured.” It tells the story of three sisters who witness the slow pace of development in Omani society during the 20th century.

“I am thrilled that a window has been opened to the rich Arabic culture,” Alharthi told AFP after the ceremony at the Roundhouse in London. “Oman inspired me but I think international readers can relate to the human values in the book—freedom and love,” she said.

The jury praised an “elegantly structured and taut” novel, which “tells of Oman’s coming-of-age through the prism of one family’s losses and loves.”

“It is an honor for each and every Omani man and woman… [and the prize] will help spread Omani literature across the world,” he added.

Alharthi is the author of two previous collections of short fiction, a children’s book and three novels in Arabic. She studied classical Arabic poetry at Edinburgh University and teaches at Sultan Qaboos University in Muscat.

In an interview with the BBC at the weekend, Alharthi said she had wanted for a “very long time to write a book about life in Oman [but] couldn’t when she was actually in Oman. But when I went to Edinburgh, the first year was difficult for me, homesickness, cold, so I felt that I need to go back to warmth and feel something from home.” She added: “Actually writing saved me.”

Her prize-winning novel—which the Guardian newspaper said offers “glimpses into a culture relatively little known in the west”—came out in 2010.

Alharthi said on Tuesday that the novel touches on the history of the slave trade in Oman, an absolute monarchy where Sultan Qaboos, who has ruled since 1970, has been pushing for reform. For one expert of Arabic and Middle Eastern literature, it could be a game changer for novels emerging from the region.

“It has the potential to orient publishing away from the Arabic novel as answering the question ‘what can we learn about them?’ and towards the Arabic novel as a work of art,” said Marcia Lynx Qualey, editor of ArabLit Quarterly. “The surge in translation of Arabic-language novels is already in progress, but I think this reorients publishers somewhat,” she told AFP.

Qualey said there “is definitely a growing interest in works by Gulf authors.”

“In Kuwait, Oman, Saudi, and elsewhere there are authors writing on issues of class, domestic violence, slavery, racism, patriarchy, power, and other issues that are of global interest,” she added.