Omarosa Releases Audio of Her Firing 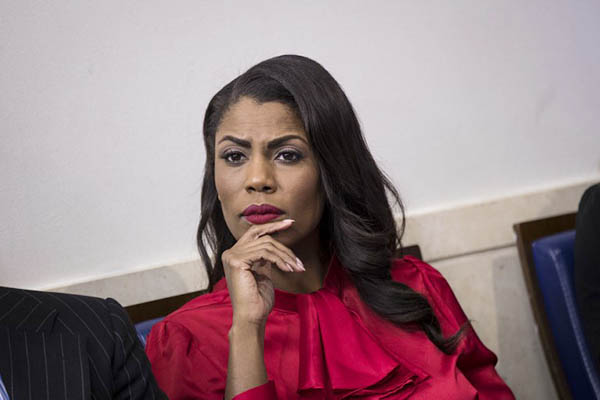 A former White House staffer who has written a bombshell memoir of her time serving under President Donald Trump released a secret tape on Sunday of the chief of staff firing her.

Omarosa Manigault Newman said she decided to release the secret recording of John Kelly in the Situation Room—which marks a breach of security protocols—and recorded conversations with Trump because “this is a White House where everybody lies.”

The White House Situation Room is supposed to be a top-security room and electronic devices are banned there, but it was not immediately clear whether Manigault Newman would face legal ramifications for releasing the recording.

On the tape, which Manigault Newman said was made in 2017, a voice she claims belongs to Kelly points to “significant integrity issues” that prompted him to fire her. “They take me into the Situation Room, the doors are locked, they tell me I can’t leave and they start to threaten me, put fear in me, to put me under duress,” she said in an interview on NBC’s Meet the Press that featured the recording.

“I protected myself because this is a White House where everybody lies. The president lies to the American people, [spokeswoman] Sarah Huckabee stands in front of the country and lies every single day. You have to have your own back or else you’ll look back and you’ll have 17 knives in your back.”

She called on the White House to release her personnel file to clear her name.

“The very idea a staff member would sneak a recording device into the White House Situation Room shows a blatant disregard for our national security,” Sanders said in a statement. “And then to brag about it on national television further proves the lack of character and integrity of this disgruntled former White House employee.”

Manigault Newman, who is African-American, also writes in her incendiary memoir Unhinged—set to hit bookshelves on Tuesday—that Trump uttered a racial slur “multiple times” during the making of his hit show The Apprentice prior to his presidential run, and that there are tapes to prove it. She branded the president as “racist” and he, in turn, called her a “lowlife” for making the recording.

Manigault Newman described herself as being “complicit” in the White House’s deception of Americans. “It is hindsight. But I will say this to you, I was complicit with this White House deceiving this nation,” she said on NBC’s Sunday talk show. “They continue to deceive this nation by how mentally declined he is,” she said, referring to Trump, “how difficult it is for him to process complex information. How he is not engaged in some of the most important decisions that impacts our country. I was complicit, and for that I regret.”