Home Latest News On the Frontlines 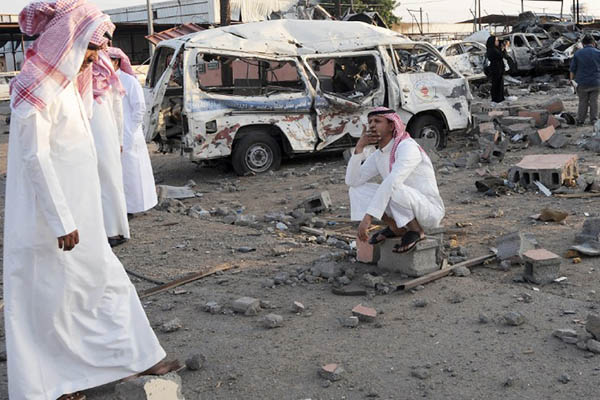 Pakistanis among the injured in rebel-launched airstrikes on Saudi city near border with Yemen.

It doesn’t look like there is war in Najran. Not when you drive down King Abdul Aziz Road in the late afternoon sun, past the luxury hotel, the hypermarket and the sprawling gym in this southern Saudi city near the border with Yemen. But enter the King Khaled Hospital and you can see what the war has done.

Saleh al-Abbas weeps outside the room where his nine-year-old son Mahdi lies with his head and face bandaged. A Katyusha rocket struck their home around breakfast on Saturday and Mahdi’s cousin, aged three, is dead.

The boy brings to at least 31 the number of civilians killed in Najran since early last year, when Yemen’s Houthi rebels and their allies began bombarding southern Saudi Arabia in retaliation for airstrikes by a Saudi-led coalition.

The Arab alliance intervened in March 2015 to support Yemen’s internationally recognized government after the Houthis seized much of the country. At least 19 soldiers have also died in the Najran region, which is just a few kilometers from the border and has borne the brunt of rebel attacks.

“They target the civilians. The main ones suffering are the civilians,” says Colonel Ali al-Shahrani, a spokesman for the Saudi Civil Defense Department. He says the bombardment worsened after the suspension in early August of United Nations-brokered peace talks. “Now it’s continuous,” he tells visiting foreign reporters.

On Friday, rebels made a rare hit on Saudi infrastructure when a Katyusha hit the Saudi Electricity Company’s Najran Power Plant at the base of a mountain.

There were no injuries but it punctured an oil tank, starting a fire that left much of the facility blackened and twisted. The tank still spewed fuel on Saturday as fire crews and officials inspected the damage.

Escorted by the information ministry, foreign journalists on Saturday were granted rare access to Najran. The tour coincided with increased criticism of Saudi Arabia over civilian casualties in its Yemen bombing campaign.

On Thursday the U.N. called for the creation of an independent international body to investigate an array of violations in Yemen’s war. A report laid out allegations of grave human rights abuses by all sides in the conflict.

More than half of the 6,600 people killed in Yemen since March last year have been non-combatants, the U.N. says, adding that 6,711 were wounded.

At the King Khaled Hospital, a doctor says three Pakistani workers were also injured in the attack that saw Mahdi wounded and his cousin killed. One of the Pakistanis, Imran Khan Aslam Khan, lies with eyes closed, his head bandaged and a tube in his mouth after surgeons removed shrapnel from his brain and heart.

“Now he is OK,” the doctor says as surgeons work on another wounded Pakistani.

In another ward, several men are recovering from a separate attack on their automotive garage. “I was in the workshop when suddenly the shells hit,” Suleiman Abdulthabit, a 25-year-old Yemeni mechanic, says quietly from his bed, touching the back of his head to show where some shrapnel hit.

Earlier this month civilians suffered their heaviest losses when four Saudis and three Yemenis died in what officials said was a Grad rocket strike. It leveled a car dealership in the industrial area where the power plant is located.

Streets surrounding the destroyed dealership are flooded with leaked fuel, the cars are now twisted metal, and shrapnel has deeply scarred a wall across the street.

Saudi Arabia has deployed high-tech Patriot missile batteries against long-range ballistic missiles the rebels have fired occasionally towards Najran and elsewhere in the south.

Katyushas are harder to detect, officials say, although authorities regularly send out SMS and television announcements to help people protect themselves. But attacks can “come anytime,” Shahrani says, and residents say there is little they can do. “We just don’t gather at the sites after the missiles or the rockets land,” Najran resident Fahad Juraib, 48, tells AFP.

He and others are stoic as they get on with their lives. Najranis are dealing with the war “very casually… There is no crying, no screaming, no loud voices,” Juraib says.

There is only a quiet hope. “They wish the war would stop.”