On the Road With Bangladesh’s Female Rickshaw Wallah 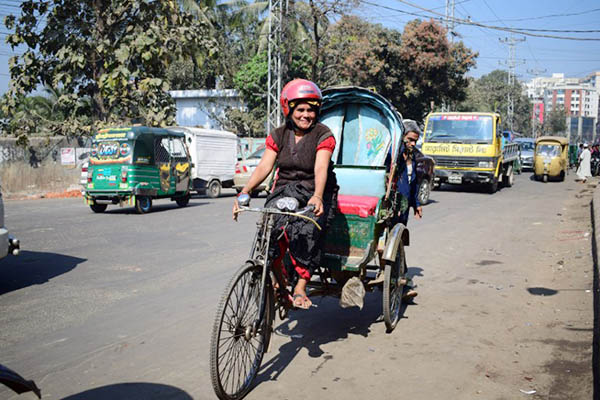 Mosammat Jasmine says she is merely ensuring her children don’t go hungry and get a decent education.

As Bangladesh’s only known woman rickshaw wallah, Mosammat Jasmine may be a feminist icon but to the passengers she cycles around the streets of Chittagong, she is known as “Crazy Auntie.”

“I do it to make sure my sons don’t go hungry and they get a decent education at a good school,” says the mother of three as she takes a break at Chittagong bus station. “Allah has given me a pair of hands and legs to work with. I don’t beg—instead I earn a living by using his gifts,” she adds.

Muslim-majority Bangladesh is one of Asia’s most conservative societies where the concept of a woman doing such a job had been unheard of before Jasmine hit the road five years ago. Left to fend for three young children when her husband ran off with another woman, Jasmine initially tried her hand at being a maid and then working in one of Bangladesh’s garment factories but found neither job suited her.

“A maid’s job is good if you only have to worry about yourself but not if you’ve got children. And the factory work is really back-breaking and the pay is really poor,” the 45-year-old explains.

Struggling to make ends meet and determined to pay for her children’s education, she decided on her radical career change when a neighbor who owned a rickshaw offered to lend it to her for a few days. Working out how to navigate the streets of Bangladesh’s second city was the easy part although she did find it painful at times to peddle her brightly colored tricycle up some of its hilly neighborhoods.

But finding willing passengers proved a stiffer challenge. “Initially, many simply refused to get on board and some taunted me, saying I was doing a man’s job,” she recalls. “Others told me that Islam does not permit a woman to roam around like this while there were some who refused to pay me the same fare as a male driver,” Jasmine says, before adding: “I stuck to my guns as who else pays my bills, who is else is going to cover the cost of educating my sons?”

On average she earns 600 taka ($8) a day for an eight hour shift on the rickshaw, part of which she pays as rent to the rickshaw owner. She works seven days a week.

Now a familiar sight on the streets of the bustling port city, she has won the respect of her colleagues. As she parked up by the bus station, she exchanged smiles and greetings with around a dozen male drivers.

Since switching last year to a battery-run electric rickshaw, the work has become a little less arduous but she is still an inspiration to many. “Jasmine is unique. She is the only female rickshaw-puller among all of Bangladesh’s 160-million population. It is overwhelming to see her courage,” local rights activist Suzana Salim told AFP.

The traffic police applaud her good road sense and for always wearing a helmet—unlike her male counterparts. And even some with religious authority have started praising her.

“She is a good example to society given that many girls who fall on hard times turn to prostitution or drugs,” said Nurul Alam Azmiri, the imam at a local mosque. “She has a vision for her kids, which is commendable.”

Young people are particularly keen to flag her down, drawn in part by the loud music that blares from the speakers on “Pagli Khala’s” vehicle.

Despite the growing acceptance, Jasmine—who is a practicing Muslim—says she still faces taunts by people who question her faith. “I don’t listen to them,” she said. “My sons need their education and so I’ll do my best to ensure that for as long as I live.”