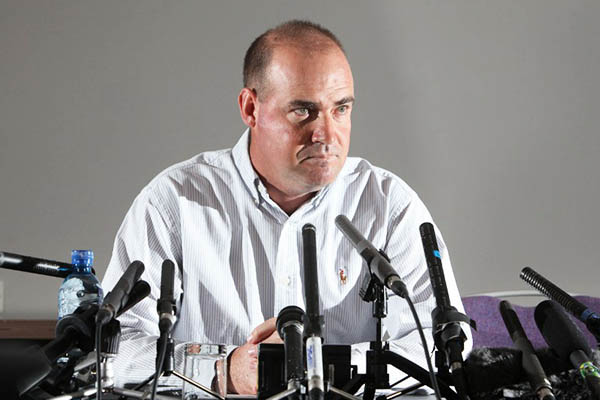 Pakistan’s one-day form is a “real concern” to coach Mickey Arthur and the South African believes it could “take some time” to improve the team’s standing in white-ball cricket.

The 1992 world champions, Pakistan are languishing in ninth place in the International Cricket Council’s one-day internationals rankings, with only hosts England and the top seven teams come September next year guaranteed a place at the 2019 World Cup.

A World Cup without Pakistan seems unthinkable but Arthur, speaking ahead of his one-day ‘debut’ with the team, believes they must tackle their shortcomings in limited overs cricket head-on, starting with Thursday’s first of two ODIs away to Ireland in Malahide, near Dublin, which will act as a lead-in to a five-match series against England.

“We have not done well in ODIs. I think this is a real concern for me,” Arthur told AFP in London before the squad traveled to Ireland. “Pakistan’s position at number nine in one-day cricket is not good. Pakistan is not the number nine team but I do fear that our one-day cricket will regress because of playing the style or brand that belongs to the 1990s when the game has moved on such big amount. I also think that your fitness and fielding play a massive role. So we need to get our players up to speed on that. I have looked at the one-day players and they look good but it’s going to be extremely tough. England is a very, very good one-day team now, so for us it’s about our progression. This is where our one-day journey starts. It’s not I am cautioning anybody, but I think it will take some time to get our one-day side to exactly where we want them to be.”

When Pakistan won the 1992 World Cup they were captained by Imran Khan, one of the outstanding all-rounders of his generation. Finding another Imran was always going to be a difficult task, but right now Arthur would love to have a genuine all-rounder in his squad. “We lack all-rounders and we have to find them. I just look at England they have got so many all-rounders and, with us, our batting ends at [number] seven. In one-day cricket you need all-rounders, so we are trying some new things, we have some good players like Mohammad Nawaz, Imad Waseem and Hasan Ali. We have [wicket-keeper] Sarfraz Ahmed and we can have him up the order, so we have to get that batting depth.”

The former South Africa and Australia coach added: “We need to have attacking players top of the order and then have someone at number six who can clear the ropes. We have to find good players. England’s system is so good that it keeps producing players. They play a lot of Twenty20 and one-day cricket so we have to look at our domestic cricket. We have to develop batsmen who are fearless. England have those fearless players in Jason Roy, Jos Buttler and others.”

But despite his worries Arthur believes Pakistan—who came from 2-1 down to draw their four-match Test series against England at 2-2 with a 10-wicket win at The Oval on Sunday—can be competitive against England.

“We go into every series thinking we can win it. I certainly have no fears that we will lose 5-0. For me it’s my first opportunity to see the one-day players and take them into the future. England is a very, very good team but I will be really disappointed if we lose 5-0.”