One Killed in Charsadda Bombing 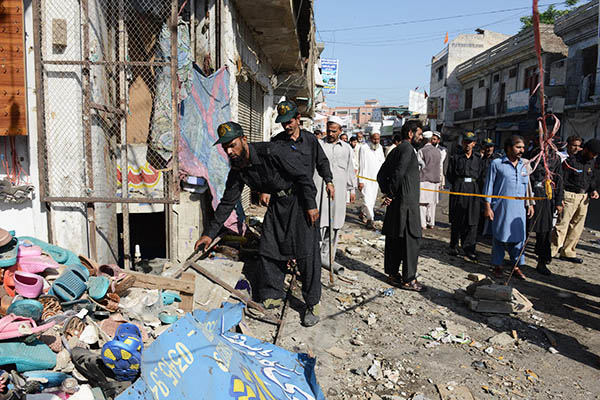 At least 33 wounded in blast targeting police convoy in the main square of Charsadda Bazaar.

At least one person was killed and 33 injured in a bomb attack on a police van in Charsadda on Tuesday, police said.

It was the second attack on police in Khyber-Pakhtunkhwa province in less than 10 hours and comes less than a week after the Pakistani Taliban formally ended a ceasefire called to help peace talks.

The incident in the main square of Charsadda Bazaar left one civilian dead and two women and three children among the wounded. Seven policemen in the patrol van were also injured.

“The bomb was planted in a motorcycle. One passerby was killed and 33 other injured,” said Shafi Ullah Khan, Charsadda police chief. He said the bomb was detonated by remote control as the police van passed the motorcycle on the main square. “The police patrolling van was the target,” Khan added.

The attack came after unidentified gunmen late Monday killed five police officers on patrol in the town of Badaber, a flashpoint for violence in the district of Peshawar. A civilian driving a passing car was also killed, with two policemen and another civilian left wounded in the attack.

No group has yet claimed responsibility for the latest attacks.

Last Wednesday the Tehreek-e-Taliban Pakistan (TTP) said it would not extend a ceasefire it began on March 1 as part of peace talks with the government aimed at ending the militants’ bloody seven-year insurgency.