Home Lightbox One Pitch for 1.4 Billion

One Pitch for 1.4 Billion 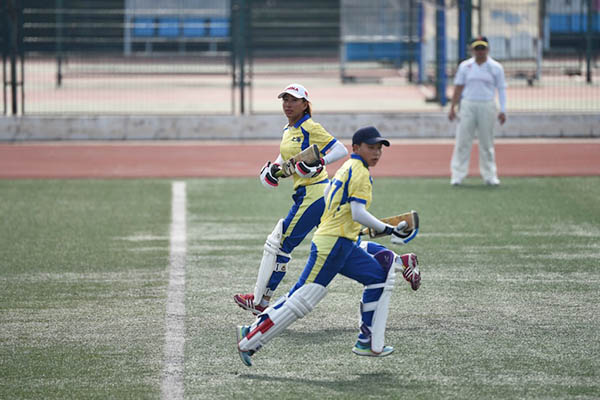 They play on a football pitch with plastic wickets and most Chinese people have never even heard of cricket. The Ashes it is not. But a devoted band of followers says the sport is gradually growing in China, where there is thought to be only one grass cricket pitch for a population of 1.4 billion.

They are up against scant domestic media coverage and limited facilities, and Chinese cricket making worldwide headlines for paltry scores.

In 2017 the men’s national side was bowled out for a humiliating 28 runs against Saudi Arabia in a World Cricket League regional qualifier. And this January the women’s team were skittled out for just 14 runs against the United Arab Emirates, then the lowest women’s total in T20 International cricket.

Undeterred, a handful of spectators recently turned out to watch Shanghai’s women’s team, and saw them thrash a Hong Kong outfit in a 20-overs-a-side game reduced to 15 overs because of the heat.

In the absence of a grass cricket pitch—there is one in China, but it is 1,500 kilometers south in Guangzhou—the women played on an artificial football pitch. “The first question [I get asked is], ‘What’s cricket?’” said Ma Fei, an umpire who with his whites and sun hat certainly looks the part. Ma, who also goes by the Pakistani-sounding name Malik, then tells the frequent inquisitors that it is a bit like baseball.

“And then they understand,” he said, adding that he was attracted to the game by its “ceremonial procedures… the tea breaks, for example.”

Reliable figures are hard to come by, but the International Cricket Council (ICC), the sport’s governing body, said in 2017 that about 80,000 people played in China. Half of those are women and girls.

The ICC has made growing the game in the world’s second-biggest economy a priority, but the current number is measly considering China’s population.

Shanghai’s Huang Zhuo, a pioneer of the sport in China, is among those who believe that Chinese cricket can flourish. A swashbuckling batter, she represented China at the Asian Games in Guangzhou in 2010 and at Incheon in 2014. There was no cricket at the 2018 Games.

China’s women came fourth in 2010, when cricket made its Asian Games debut, and it is set to return to the Games in 2022 in China’s Hangzhou—where the country’s second grass pitch is under construction.

Huang was introduced to the game in 2006 by the visiting Asian Cricket Council, which wants to get the world’s most populous country and its growing middle class into the sport. “We were in university when cricket first entered China,” she said. “To be honest, we didn’t really know what it was.”

The 33-year-old Huang, who teaches cricket at school, warned that if success comes, it could be a way off. “I think China is now paving the road for growth because we all hope to start [fostering talent] young,” she said. “So what we have been doing is youth training, and specifically, making cricket more popular and laying the foundations in Shanghai.”

Shanghai, because of its large number of expatriates, is one of the main cities in China for cricket. The first recorded cricket match in China was played in 1858 between officers from the British Navy and a Shanghai side. But while the British Empire spread the game to Australia, South Asia, the Caribbean and Hong Kong, among others, mainland China resisted colonization and the sport never caught on.

“China’s current cricket situation is in a state of unfolding,” said the umpire Ma, moments before the Hong Kong team attempted to chase down 108 runs to beat Shanghai. The visitors fell well short, making 68-5 in their 15 overs to give Shanghai an emphatic victory—and a glimpse of a brighter future.

“It may be too soon to talk about the world [level] now, but I hope China will achieve good results in Asia,” said Ma. “Then break Asian records and set sights on the world.”