One Sentenced to Death Over Mashal Khan Lynching 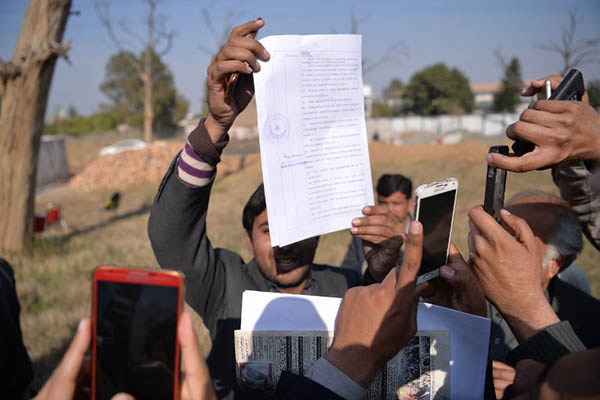 Five others awarded life imprisonment, an additional 25 given three-year sentences by anti-terrorism court

An Anti-Terrorism Court sentenced one person to death and five others to life imprisonment on Wednesday for lynching a student accused of blasphemy, a crime which sent shockwaves through the Muslim-majority country.

Mashal Khan, 23, was stripped, beaten and shot by a gang made up mostly of students last April before being thrown from the second floor of his dormitory at Abdul Wali Khan University in Mardan.

The brutality of the attack, which was recorded on mobile phone cameras and posted online, stunned the public and led to widespread condemnation—including from prominent Islamic clerics. Protests erupted in several cities.

“One of the accused has been awarded a death sentence, [five] were given life imprisonment while 26 have been acquitted,” Saad Abbasi, a defense lawyer, told AFP at the prison where the verdict was announced.

An additional 25 were given three-year sentences, he added, saying he planned to file an appeal against the decision.

The court sentenced Imran Sultan Mohammad to death over his role in shooting Khan during the lynching, a crime he confessed to earlier.

Ahead of the verdict, heavy security was enforced at the jail in the city of Haripur where the accused were detained, with the area cordoned off by police and elite commandos. The proceedings were held in an anti-terrorism court inside the jail for security reasons.

Around 100 relatives of the accused students waited outside the prison walls as news of the verdict trickled out. “A day will come that the judge will answer the God. The verdict he has announced is unjust,” said Waheedullah, whose son was given a three-year sentence.

Soon after the court handed down the punishments, members of hardline religious groups who supported the accused circulated messages on social media appealing to the public to welcome the “heroes.”

Around 2,000 people gathered at the main entrance of Mardan city, Khan’s hometown, showering the acquitted students with flowers, chanting slogans against the provincial government and demanding the release of those convicted. Students who took part in the attack had been rounded up after being identified through CCTV footage from the university and video clips.

An official report released months later concluded Khan was falsely accused, saying the murder was instigated by members of a secular student group who felt threatened by Khan’s growing prominence as a critic of rising fees and of alleged corruption at the university.

Blasphemy is an enormously sensitive charge in Pakistan, and a criminal offense that can carry the death penalty. While the state has never executed anyone under blasphemy laws, mere allegations have prompted mob lynchings and lesser violence.

Since 1990 vigilantes have been accused of murdering 65 people tied to blasphemy, according to research compiled by the Center for Research and Security Studies.

Whether Mashal Khan was declared not guilty of blasphemy by a lawful court, or not, his murder by a mob is equally condemnable. His guilt or innocence is irrelevant to the abhorrent crime of the mob.
None of those who took part in Mashal’s pre-meditated, sadistic killing must be allowed to escape unpunished.
The recent show of support for the murderers by a huge mob may partly be a symptom of cult rivalry between those extremely fanatical Barelvi who celebrate Salman Taseer’s vicious murder and now the fanatical element of Deobandi who do like being outdone. They wish to be seen equally rejoicing in their own vicious ignorance and evil.