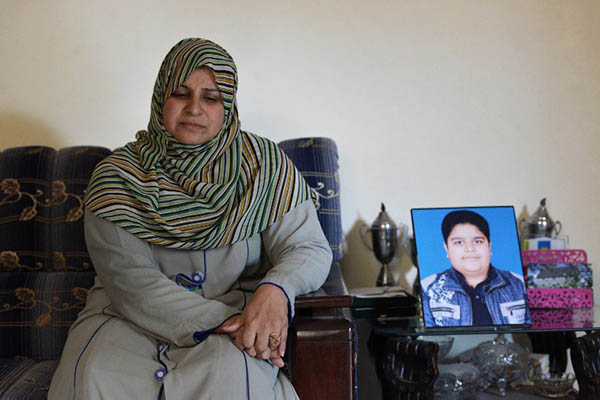 Mubashir Subhan was in the school auditorium, surrounded by friends, when the Taliban gunmen came crashing in. The first bullet grazed the back of his head, the second passed through his shoulder, and the third struck his left hand.

More than 150 lives were lost in the Peshawar school massacre of December 16, 2014, the deadliest extremist attack in Pakistan’s history. One year on, those who survived now study in the same rooms where they huddled in terror as their classmates fell around them.

The majority of them were children, many of whom were in the auditorium with Subhan when at least six attackers armed with guns and explosives went on a cold-blooded killing spree. Many are still gripped by a sense of paralysis when they enter the school.

“I feel unable to function. I keep remembering everything,” Subhan, a bearded, soft-spoken 16-year-old says. When he is alone, memories of the friends who died alongside him that day come crowding in, and he says he cannot fathom how quickly his life was shattered. “I think about how I used to be with my friends,” he says.

His parents also remember how he used to be, saying their confident, outgoing son was transformed by the hours-long siege. “The slightest of things he takes as though a bullet hit him,” says his father Subhan Uddin. “When he comes home he just locks himself in his room. He doesn’t meet us or his brothers or sisters or friends. He just sits and thinks.”

The auditorium is now a sports hall and soldiers stand atop recently fortified walls as children play on the green, expansive grounds below. But the trauma has lingered, says Andaleeb Aftab, a chemistry teacher at the school who fled into a bathroom with other staff after gunmen opened fire on them in a hallway.

Aftab’s son, 16-year-old Huzaifa, was among those who died in the auditorium. In their last exchange, she said, he came to the staff room and asked her for pocket money. “But I told him I just saw you taking pocket money from your father in the parking lot—so don’t double cross me!” she remembers.

Aftab was trapped in the bathroom until evening, listening for hours as the attackers blew themselves up one by one. It was only after she was rescued that she learned her son had died. “They made our college a graveyard,” she says.

Mathematics teacher Abu Bakar, 43, now uses a cane to walk after he was shot three times when he threw himself in front of four students fleeing the gunmen. Three of them survived. “I’m a teacher and I have to do my duty no matter what,” he says.

For other survivors the destructive effects of December 16 continue to shape their future. Waheed Anjum, 18, was shot three times during the attack—once in each arm and once in the chest. Numerous operations meant he was out of school for six months, affecting his final grades, as well as his chances of either entering a college engineering program or becoming a soldier like his father. “I can’t move my arms properly. I can’t lift weights,” he said. “They have declared me unfit.”

On Wednesday, the anniversary of the attack, Prime Minister Nawaz Sharif and Army chief Gen. Raheel Sharif will join opposition leader Imran Khan for a ceremony at the school marking the massacre.

The attack on the Army Public School saw a shift in public opinion on the country’s more than decade long struggle against extremism. Parents seeking vengeance backed by a shocked and outraged public drove support for a nationwide military-led crackdown.

The Army intensified an offensive against militants in tribal areas where they had previously operated with impunity, and the government launched a sweeping plan to tackle extremism, including greater prosecution of hate crimes. The effort has seen levels of militancy-linked violence fall to their lowest levels since 2007, the year the Pakistani Taliban came into being.

But critics have voiced concerns over a failure to tackle the long-term causes of the violence, suggesting the drop in attacks may be a veneer covering the extremism that still bubbles beneath society’s surface.

They are recovering “a little,” she said, but the suffering goes on. “We’re not out of the 16th of December.”