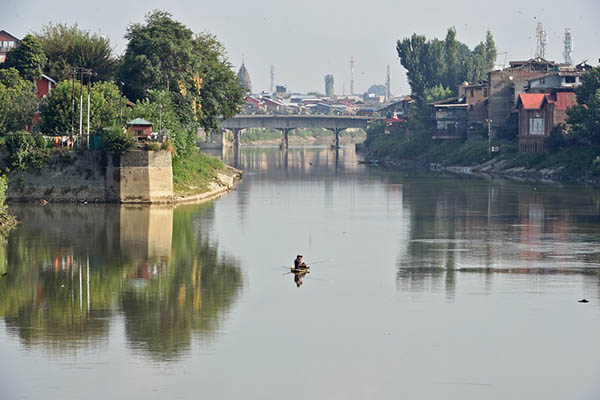 With its breathtaking scenery, snow-capped mountains and placid lakes, temperate Kashmir is a popular destination for hordes of domestic and international tourists during the scorching summer season in the rest of India. But authorities in early August called for visitors to leave “immediately” over “terror threats,” sparking a mass exodus just days before New Delhi’s controversial decision to bring the violence-hit region under its direct rule.

“They went to every houseboat, hotel and street to force every single tourist out of Kashmir,” said Shikara owner Yaqoob. “Even now they go around hotels to check if anyone is left.”

Streets buzzing with locals and tourists are now mostly deserted. In their place are coils of barbed wire, security checkpoints and tens of thousands of extra troops New Delhi sent to the Himalayan region to reinforce the half a million already there. Authorities cut off all communications—including the internet and phone lines—making contact with the outside world very difficult.

“This is not what we expected,” said a Taiwanese couple, the only tourists AFP found in Srinagar, adding they had planned their trip a year ago. “Nowadays not many people can live daily life without having all this modern technology, without the internet… That’s kind of really hard for people, especially tourists. We are scared of the entire situation.”

Kashmir, split at the end of British colonial rule in 1947 between India and Pakistan, was a popular international getaway until an armed insurgency against Indian rule erupted in 1989. The conflict, which has claimed tens of thousands of mostly civilian lives, has challenged efforts to promote tourism in the so-called “Switzerland of the East.”

Tourist arrivals have ebbed and flowed over the years in line with the scale of the insurgency. In India-held Kashmir, the number of holidaymakers dropped from more than 1.3 million in 2012 to 850,000 in 2018, according to government figures. But more than half-a-million people visited the valley in the first seven months of this year, with over 150,000 vacationers arriving last month alone, according to official data.

In addition, some 340,000 religious tourists were visiting the valley in July before their Hindu pilgrimage was called off due to the terror claims. A few days later, the valley fell silent. Just 150 foreign travelers have visited Kashmir since Aug. 5 when New Delhi scrapped its autonomy, mostly people who booked their trips in advance.

The sharp drop-off is sending shockwaves through the estimated $500 million-a-year tourism industry, which employs some 100,000 people. Many others make a living from related sectors including handicrafts, horticulture and transport.

The Indian government has stressed that bringing Kashmir under its direct rule would boost the economy and generate more jobs and development. Locals are skeptical, pointing to the “terror threat” claims that sent visitors scrambling to leave on planes and buses.

“It was a lie. No one was out to harm the pilgrims. They wanted to revoke the autonomy and used terror as a false flag,” said houseboat owner Basheer.

This is not the first time the sector has experienced major disruptions, most recently in 2008, 2010 and 2016 when large-scale protests broke out. But with no end to the current crisis in sight, residents fear the uncertainty will keep potential visitors away for a prolonged period of time.

Some countries have already issued advisories against travel to the region and tourist operators fear thousands of jobs could be lost, weakening the economy and further inflaming tensions. “When your business is down and your basic rights are taken away, you can’t expect us to remain sane,” said handicrafts store owner Sameer Wani. “It will come to a do-or-die situation soon.”