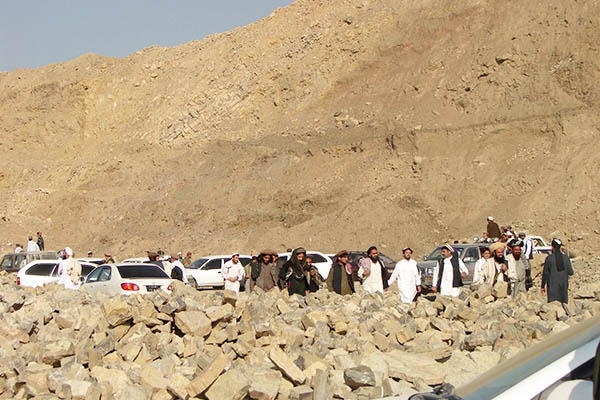 Defense minister says there will be no timeframe for military operation and troops will not leave until area has been scrubbed of militants.

Pakistan on Monday launched fresh airstrikes on North Waziristan, where it has deployed up to 30,000 troops in a long-awaited offensive to eliminate Taliban and Al Qaeda militants.

Operation Zarb-e-Azb was launched a week after a brazen attack on Karachi’s Jinnah International Airport, which left 28 people dead and sounded the death knell for a troubled peace process. The military’s media cell, the Inter-Services Public Relations (ISPR) Directorate announced the operation late on Sunday: “[The] armed forces of Pakistan have launched a comprehensive operation against foreign and local terrorists who are hiding in sanctuaries in North Waziristan Agency.” The operation’s name refers to the sword wielded by Islam’s Prophet during the battle of Badr.

The official announcement followed early morning shelling of eight suspected militant hideouts in the region that left at least 105 dead—although reports claimed the number could be as high as 150. According to the ISPR, many of the militants killed were of Uzbek origin and had played a role in the Karachi attack, which was jointly claimed by the Tehreek-e-Taliban Pakistan and the Islamic Movement of Uzbekistan. “Abu Abdul Rehman al-Maani, an Uzbek commander, was killed in the airstrikes,” a military official told Newsweek on condition of anonymity. There were reports that al-Maani had planned and executed the attack on Karachi airport. “There are also reports of some East Turkistan Islamic Movement (ETIM) terrorists being killed in the strikes,” he added. The number and exact identity of the deceased could not be verified independently, as the region is inaccessible to journalists.

On Monday, a local security official said fighter jets bombed two government schools west of Miranshah, killing at least 10 Uzbek militants who were sheltering in them.

The military statement announcing the operation said the armed forces would ensure that the tribal regions had been scrubbed of militants. “Using North Waziristan as a base, these terrorists have waged a war against the state of Pakistan and have been disrupting our national life in all its dimensions, stunting our economic growth and causing enormous loss of life and property,” it said, adding, “They [terrorists] have also paralyzed life within the agency and have perpetually terrorized the entire peace loving and patriotic local population.

“Our valiant armed forces have been tasked to eliminate these terrorists regardless of hue and color, along with their sanctuaries. These enemies of the state will be denied space anywhere across the country.”

Defense minister Khawaja Asif said the time for dialogue was over and the nation could no longer tolerate attacks on “innocent Pakistanis and damage to national assets.” There will be no let up this time, he added. “This operation will continue till the surrender or elimination of enemy,” he said.

Prime Minister Nawaz Sharif addressed Parliament on Monday and told lawmakers that the military operation would continue until its “logical conclusion.” He said the decision to launch the military operation was taken after consultations with all stakeholders, including the Army. He also urged religious leaders to help eradicate terrorism from Pakistan, adding that terrorism had affected every aspect of Pakistani society and could not be allowed to continue.

However, Pakistan Tehreek-e-Insaf chief Imran Khan alleged that the Khyber-Pakhtunkhwa government, which is ruled by his party, was not taken into confidence over the military operation. He criticized the prime minister for failing to properly “lead” the peace talks, but pledged his support for the Army and its operation.

The Pakistan Army also urged all militants to give up their arms and surrender at specially designated camps to avoid violence, according to an official statement.

“For any militants who wish to surrender before the Army, the military has established surrender camps in Miranshah,” said the statement issued by the ISPR, without clarifying what would become of the militants once they surrendered.

Defense minister Asif told Newsweek the military operation would continue until every last militant had been driven out of North Waziristan. “After they [militants] did not respond positively to our offer to restore peace in the region through peace talks, and attacked convoys of our security forces, [we felt] this was the best time to retaliate strongly to them,” said the minister.

Prime Minister Nawaz Sharif said he would inform all stakeholders, including opposition parties and other politicians, about the ongoing military operation in North Waziristan.

A military official in Miranshah told AFP: “Thousands of troops will participate in this action. You can roughly say 25,000 to 30,000 troops will be involved in the operation. We are trying to finish this operation as soon as possible but can’t give an exact time frame. It can conclude in a few days but can also take longer,” he added.

Talat Masood, a retired general and security analyst, said the army would aim to end its operation before the Islamic month of Ramazan, which begins around June 28. “It should go only for two, three weeks and then troops can be stationed in the area to control the situation and consolidate the positions,” he told AFP. The operation’s success, he added, was contingent on sealing the porous Pakistan-Afghanistan border which foreign fighters including Chechens, Uzbeks, Turkmen, Tajiks and Uighurs have crossed in recent weeks.

A military statement said Afghan security forces “have been requested to seal the border on their side to facilitate elimination of terrorists who attempt to cross the border.” It said troops had also cordoned off all known terrorist bases within the tribal agency. It added that announcements would be made for local residents to approach designated evacuation points.

Thousands of civilians remain stranded in North Waziristan following a curfew imposed by the local administration. Shoot-on-sight orders have been imposed on those who leave their homes after dark, according to local intelligence officials, leading to two people being critically wounded near Miranshah. In Miranshah itself, imams made announcements from mosque loudspeakers asking people to recite from the Quran and pray to God for the safety of those who remained behind.

“At least 60,000 people have fled North Waziristan to the adjoining areas,” a security official told Newsweek. The government has established a refugee camp on the border of Bannu district and North Waziristan, he said, but no one had registered themselves yet, primarily due to lack of facilities.

The U.S. has been pushing the Pakistan government to launch a ‘boots-on-the-ground’ military operation in North Waziristan for several years, once terming the region “the most dangerous” in the world. The area bordering Afghanistan is believed to harbor militants both local and foreign, including members of Al Qaeda, Uzbeks, Tajiks, Arabs and Chechens. According to locals, U.S. drones have been spotted hovering overhead during the operation, raising suspicion that Washington and Islamabad were coordinating their efforts after two U.S. drone attacks—the first this year—killed 16 militants on Wednesday.

This operation should have been launched much earlier. Winters were the most suitable for this operation and would have successfully concluded in much less time. Nawaz Sharif basically a coward couldn’t take timely decision.