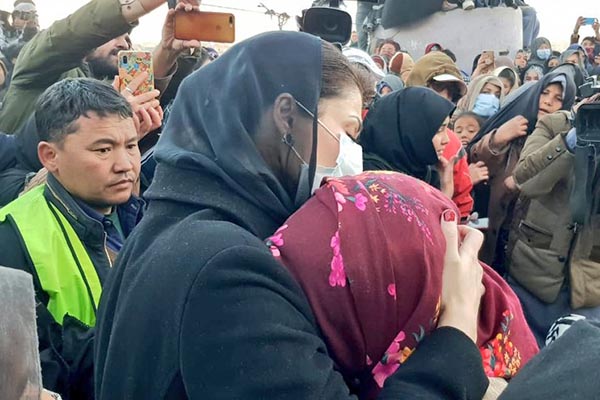 In visit to Shia Hazara sit-in, Maryam Nawaz and Bilawal Bhutto-Zardari both condole with families of victims of Machh massacre

Urging Prime Minister Imran Khan to visit Quetta so Shia Hazara protesters can finally bury the bodies of coal miners who were brutally killed by militants in Balochistan, opposition leaders on Thursday regretted that the state had failed to ensure safety for the minority community.

In his address to the mourners, Pakistan Peoples Party Chairman Bilawal Bhutto-Zardari lamented that the state had failed to implement the National Action Plan and prevent such tragic crimes. He also regretted that the only time the country noticed the plight of the Hazara was when such incidents occurred.

“Pakistan is a country where even the bodies of our deceased loved ones have to protest [for rights]. We live in a land where everything is expensive—gas, electricity and food—but the blood of our laborers is cheap,” the visibly emotional PPP chairman said. He noted that since 1999, 2,000 Hazaras had died in various terror incidents, but “not even one family had been provided justice.” He recalled that when the PPP had been in power, a similar protest had occurred and his party had dissolved the Balochistan Assembly in solidarity with their demands.

“Our government [tenure] ended, and then a new government came. And now again, another government has come and again you are protesting. And you have only one demand: that you be allowed to live,” he said, noting that this was echoing nationwide with satellite protests in major cities.

“I can only promise you, that I too belong to a family of martyrs. We, too, have been unable to get justice. I promise you, the way we work day and night to ask for justice, you too are our brethren … till the day I die, and till I continue to serve the people, it will be my effort to [safeguard the lives of all Pakistanis],” he said, and appealed to the state to look after the people who need it the most.

“If you cannot provide these people justice, then who will we provide justice to? What will we tell the world? That we cannot guarantee the right to life here?” he said, adding that the government’s foremost priority should be ensuring people’s lives, with employment and economic progress coming later.

“You [Imran Khan] promised to eradicate terrorism,” he said, adding that it did not matter if foreign elements were involved. “It is our state’s failure if they succeed to murder our citizens like this,” he said. “We support all your demands and promise to you that in this injustice and oppression you are facing, the PPP will always stand by you, and soon we will also share in your happiness,” he added.

In her address, PMLN Vice-President Maryam Nawaz said it was difficult for her to find the words to express her grief and console the people gathered at the sit-in. “I salute you. You have lost more than 2,000 people. Each one of you is an open book, telling the story of such pain and sorrow,” she said.

“I ask Imran Khan, these bodies that lie here, is your ego greater than these?” she said, adding that he shouldn’t be afraid to face criticism. “Come here and listen to the criticism a while … it is your duty to come here and share in their grief,” she said, adding that the protesters were not asking for anything other than support from the highest office in the land.

People are sitting in subzero weather, she lamented, just waiting for the prime minister to visit. “I lament the callousness of the one in the seat of power. You are calling out to him and he does not have the time to come,” she said. She said that not being in power, she did not know what she could do other than raise her voice for the people of the Hazara community and urged the prime minister to think of his children, of his family, and imagine the level of pain the protesters must be suffering after losing their relatives.

“You are a community that has been loyal to the land and have fully participated in the progress of Pakistan. It is now the state’s responsibility to look to your needs and soothe your wounds,” she said, adding that any leader who does not do so “does not deserve to remain in the seat of power.”

After her speech, the PMLN leader also visited protesting women and expressed her condolences for their losses.

Maryam and Bilawal both visited Quetta on the fifth day of the Shia-Hazara sit-in. The mourners are refusing to bury their relatives until Prime Minister Imran Khan visits them, and condoles personally. In a posting on Twitter, the premier has promised he will visit “very soon” and urged them to bury their dead as soon as possible. However, his delay has provoked sit-ins nationwide, with most major cities of the country are now reporting protests demanding justice for the Hazara.

On Sunday, the Islamic State militant group claimed responsibility for targeting the coal miners in Machh. According to police, the militants separated the Shia Hazara from the rest of the colliers, walked them to a nearby mountain, tied their hands and fight, and executed them.