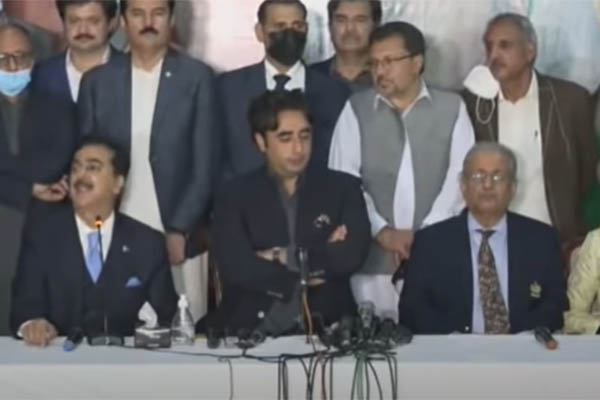 Pakistan’s opposition parties on Friday rejected Sadiq Sanjrani’s election as the chairman of the Senate and announced they will challenge the result in court.

“I have consulted the PDM [Pakistan Democratic Movement] leadership, including Maryam Nawaz and Maulana Fazlur Rehman, and have decided to challenge the election of Senate chairman,” Pakistan Peoples Party (PPP) Chairman Bilawal Bhutto-Zardari told a press conference. “In this particular case, our candidate, Syed Yousaf Raza Gilani, has received 49 votes and government candidate Sadiq Sanjrani got 48. Thus we have won the election of Senate chairman,” he said, claiming the “intent” of the rejected votes had been clear.

During the press conference, PPP leaders alleged that the votes were rejected by the presiding officer, Senator Syed Muzaffar Hussain Shah, because he is a leader of the Grand Democratic Alliance, which is allied with the federal government. A potential spoiler to the opposition’s narrative, however, is that the ruling coalition’s deputy chairman candidate comfortably secured 54 votes—seven more than the total strength of the government.

According to Bhutto-Zardari, the Senate secretary had informed PDM senators that they could stamp their vote anywhere in the column designated for their candidate, even on his name. Referring to Gilani’s claims of the establishment being neutral in the Senate elections, he said that this was the desire of the PPP. “But unfortunately, it is not the case,” he added.

To a question, PPP Senator Mustafa Nawaz Khokhar said the opposition was considering the option of a no-confidence vote against Sanjrani.

PDM President Maulana Fazlur Rehman, meanwhile, reiterated his belief that the only solution to the public’s problems was in overthrowing the incumbent regime. He told press in Dera Ismail Khan that the PDM leadership would convene on March 15 to finalize its plans for a long march on Islamabad, scheduled for March 26.

Senator Mohsin Aziz of the PTI, who served as polling agent for Sanjrani, told a local TV channel that the proceedings of Parliament could not be challenged in any court of law under the Rules of Procedure and Conduct of Business in Senate 2012. Rejecting the opposition’s claims that the votes cast for Gilani were rejected illegally, he claimed the senators had “intentionally wasted” their votes.

“They wasted their votes either under pressure or any commitment as they were not ready to vote for PDM,” he claimed, noting that the same voters had apparently supported the ruling coalition’s candidate for deputy chairman.