Opposition Will Decide When to Opt for No-Confidence Vote: Bilawal Bhutto-Zardari 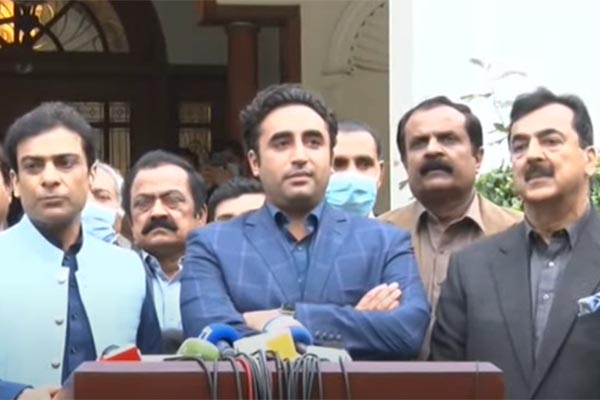 The opposition will decide when and where it will advance a no-confidence motion against the incumbent government, Pakistan Peoples Party (PPP) Chairman Bilawal Bhutto-Zardari warned on Sunday.

Addressing media in Lahore after a meeting with Hamza Shahbaz, the leader of the opposition in the Punjab Assembly, he said that the opposition had learnt lessons from the past or it wouldn’t be united right now. “We stand together and will remain united. We will strike together and win as well,” he said, adding that the PMLN had the greatest numerical strength in the Punjab Assembly and wanted to use the “power of democracy” to tackle the ruling party.

“The power of the people and the Parliament are our weapons,” he said, as he criticized Prime Minister Imran Khan’s fresh vote of confidence, which he secured by six votes over the 172 required by the Constitution. “Imran Khan was neither voluntarily voted as the prime minister by the members of the Assembly, nor was he voluntarily voted for in this vote of confidence,” he claimed, branding the exercise a “joke.”

Claiming that Khan ran uncontested and declared himself the winner, the PPP chairman repeated allegations earlier voiced by MNA Mohsin Dawar that the process had been rigged. “This allegation raised by a member of the opposition present in the Assembly, that the number of votes announced do not match the number of people in attendance, must be investigated,” he said. Dawar had, on Saturday, claimed that the number of people present in the Lower House during the vote of confidence did not match the numbers that the PTI had claimed had voted in favor of Khan.

During his interaction with the press, Bhutto-Zardari also criticized the Punjab government led by Usman Buzdar, specifically questioning the 20 months that Shahbaz had spent in jail without any formal indictment. “Lahore’s progress used to be a shining example for the rest of the country, but now it is an example of a wholly other kind,” he claimed. “Do you not wish for us all to be rid of the Wasim Akram Plus government?” he asked, referring to the prime minister declaring Buzdar ‘Wasim Akram Plus’ shortly after his election to the chief minister slot.

The PPP chairman also conveyed the opposition’s plans for the upcoming elections for the Senate chairman and deputy chairman. “We will establish contact with every senator,” he said, adding that he would visit them all personally to ask them to support Yousaf Raza Gilani as the united opposition’s candidate for the top post.

In his turn at the mic, Hamza Shahbaz stressed that the Pakistan Democratic Movement’s aims were not limited to a long march or no-confidence motion. “The dramatic fall from progress that Pakistan has witnessed in the past three years must be reversed,” he said, reiterating that the incumbent government’s losses in by-polls had shown the public was no longer interested in the PTI’s slogan of “tabdeeli (change).”