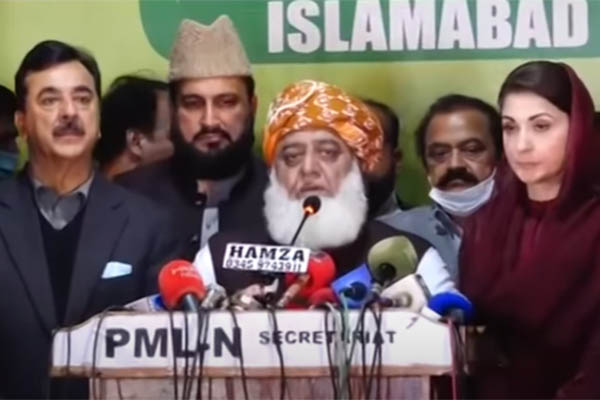 The Pakistan Democratic Movement (PDM), a 10-party opposition alliance seeking to oust the incumbent government led by the Pakistan Tehreek-e-Insaf (PTI), on Tuesday announced it was postponing a long march slated for March 26 due to differences over whether or not lawmakers should resign from Parliament prior to the protest.

“The long march must be considered postponed,” PDM President Maulana Fazlur Rehman, who also heads the Jamiat Ulema-e-Islam (Fazl), told media after a meeting of senior leaders of the opposition alliance. In a brief appearance, he said the main issue was that nine of the parties wanted to resign from assemblies prior to the long march, while one—the Pakistan Peoples Party—wanted to continue to “give a hard time” to the government in Parliament.

He claimed the PPP did not believe the issue of resignations should be linked to the long march and had sought more time to deliberate the issue with its central executive committee.

After Rehman’s abrupt exit—he walked off stage as journalists and fellow PDM members urged him to stay—Pakistan Muslim League (Nawaz) Vice President Maryam Nawaz and Pakistan Peoples Party’s Yousaf Raza Gillani field questions by the press over the discussions that had resulted in the long march being delayed.

Prior to the press conference, leaked reports of the proceedings alleged that the meeting had become contentious after PPP Co-chairman Asif Ali Zardari had urged PMLN supremo Nawaz Sharif to return to Pakistan and wage war against the government “together.” He had reportedly also chided the PMLN leader for Ishaq Dar not coming to Pakistan to vote in the Senate elections and claimed he could not fight the war because he had “a domicile from Sindh.” He claimed that the opposition resigning from Parliament would only strengthen the incumbent government.

His demands reportedly prompted Maryam to question how her father could return when his life was in danger, and ask if Zardari could guarantee his safety.

The situation was resolved after Zardari apologized to Maryam, prompting her to clarify that this was not her intention. “I merely considered myself akin to your daughters and complained as they would,” she said, adding that the matter should be laid to rest.

To questions during the follow-up press conference, Maryam said she did not wish for there to be any speculation and would not comment on the PPP seeking time to decide if it wanted to resign from assemblies. She also clarified that PPP Co-Chairman Asif Ali Zardari had urged her father, Nawaz Sharif, to return to Pakistan so the opposition’s leadership could all “struggle” together.

To this, she said, she had “respectfully” responded that Nawaz’s return at this juncture would be akin to him placing his life at risk in the hands of “killers,” which was unacceptable to the PMLN leadership and the party’s supporters. “The people of Pakistan don’t want this either, because the people invest in their leaders. People want leaders who are alive and well,” she said.

The PMLN vice-president said her father had suffered in prison, left his ailing wife in London to return to Pakistan and face jail, and was only sent abroad when his life was in clear danger. “Now that he is abroad and is not fully well, as a daughter, I believe no one has the right to call him back. I do not think that after God’s mercy, when his life has been spared, it should be handed back to these killers,” she said. “I am Nawaz Sharif’s representative [in Pakistan]. Whoever wishes to speak to him must first speak with me,” she added.

Maryam reiterated her belief that the incumbent government would soon be sent packing and and insisted a “united PDM” stands before the media.

Gilani, who contested and won a general Islamabad seat for the Senate as a joint opposition candidate, told media that his party needed more time to deliberate on resignations, as its lawmakers did not feel it was the correct course of action.

“If you want us to hand in resignations, give us some time. We will go back to the CEC, take their approval and get back to you,” he cited the PPP leadership as telling the PDM during their meeting.

He said the meeting of the CEC would be convened “soon” and its decision conveyed to both the media and journalists.