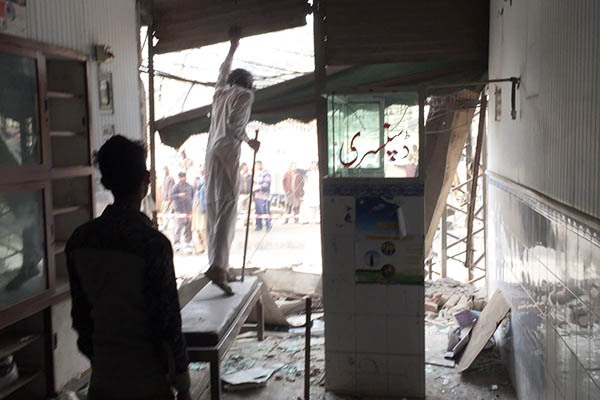 The Punjab government’s Orange Line project is hurting the very people it claims to help.

Dr. Muhammad Arif and his wife, co-owners of a private clinic near Lahore’s historic Shalimar Gardens, watched in horror on Jan. 10 as their business of 32 years was razed to the ground. “There is nothing left,” he said after the demolishers had finished their work, pointing helplessly to the ruined remains of the three-storey structure that once housed dozens of patients.

The clinic was one of two neighboring structures razed because they were in the path of the Punjab government’s $1.6 billion metropolitan train project, popularly known as the Orange Line. Spearheaded by Punjab Chief Minister Shahbaz Sharif, the 27-kilometer project was initially proposed in 1991 before being shelved due to lack of funds. It was relaunched last year with a Rs. 162-billion Chinese loan.

U.N. Special Rapporteur on the right to adequate housing Leilani Farha said a lack of resettlement or compensation schemes was causing homelessness in Lahore, while Special Rapporteur in the field of cultural rights Karima Bennoune said the project threatened heritage sites and pre-Partition buildings.

The site of Arif’s clinic has been marked as a train station by state developers, who started the land acquisition in August. Arif says he learnt of the government’s plans in December 2015, when the Lahore Development Authority, which handles planning and development in the provincial capital, issued him a notification of its intent. The hastily scrawled document directed him to officially register any complaints against the government claim on his property under eminent domain. Believing there was little to be gained by entangling himself in bureaucratic red tape, the 60-year-old physician took the Authority to court. The case was still pending before the Lahore High Court when a state employee visited Arif’s clinic on Jan. 9. “We need this space immediately,” the man told Arif. “We plan to build a staircase here that will lead up to the metro station.”

The family physician asked the man to provide an official eviction order. “I have orders from the top,” the employee told him. “There is no need for a document. I am informing you verbally.” The next day he returned—accompanied by 20 policemen, bulldozers, and construction cranes.

Arif says there was no time to save expensive medical equipment or inform his staff and the bulldozers started smashing windows and pulling down concrete walls. Panic ensued, as some patients fled for safety while cops tossed others out. The hasty demolition also severed a gas line, leaving surrounding houses without any natural gas connection.

“This was my bread and butter,” says Arif of the demolished clinic. “I worked here for 32 years. I invested at least Rs. 20 million from my own pocket to build and maintain it. Look at it now.”

There has been no word from the authorities regarding cash compensation or relocation—as mandated by law.

Arif’s neighbor, Sher Rafique, is equally despondent. The middle-aged businessman operated a grocery store in the ground floor of the building next to the clinic and rented out the upper two storeys as apartments. On Jan. 10, everyone was unceremoniously evicted.

The Orange Line will displace over 18,000 residents of the city, says a Lahore Development Authority spokesman. “We gave each occupant 15 days to dispossess their property and relocate,” says Amir Khan, the authority’s director of land acquisition. “We are embarrassed about asking people to leave, but this is for their own good. This project is for the public.” According to the Punjab government, the Orange Line is expected to accommodate 250,000 commuters daily.

This is little solace for Arif and Rafique. Their petition against the Jan. 10 demolition is still pending before court with the next hearing scheduled for Feb. 2. In the interim, Arif hopes to establish a makeshift clinic close to his house, which still exists behind the rubble that was once his pride and joy.