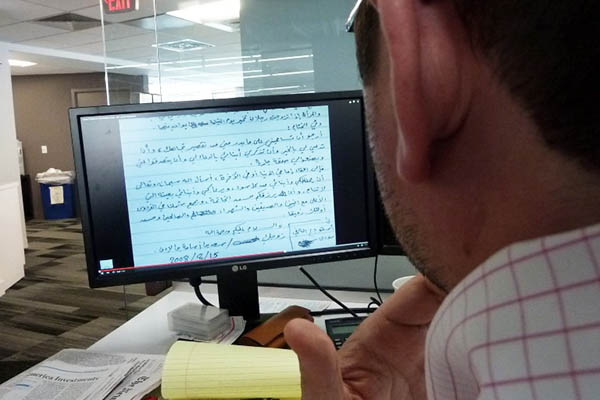 “Please enter the required information accurately and truthfully. Write clearly and legibly. Name, age, marital status. Do you wish to execute a suicide operation?” Al Qaeda’s application form starts like that of any large enterprise, but leads recruits quickly to a darker place: “Who should we contact in case you become a martyr?”

Recruiting a global jihadist network is a tricky job, especially if—like the late Osama bin Laden—you are holed up in a Pakistani compound sheltering from U.S. drones. But that is no reason not to be methodical, as the detailed militant recruitment form bearing the watermark of “The Security Committee, Al Qaeda Organization” shows.

The document was among intelligence materials seized by U.S. commandos on May 2, 2011 after they stormed bin Laden’s hideout in Abbottabad and shot him dead. U.S. intelligence agencies declassified the Al Qaeda recruitment form and around 100 other documents from bin Laden’s archive on Wednesday, allowing an insight into his thinking in his final years.

Much of the material translated by the Central Intelligence Agency and provided to AFP, such as letters to family members and drafts of speeches never delivered, is poetic or personal. But Al Qaeda’s internal planning memos paint a picture of the jihadist leader operating almost as the director of human resources at a struggling multinational.

“One of the specialties we need that we should not overlook is the science of administration,” reads one lengthy memo, calling for a professional training program. The document calls for motivated young volunteers with deep religious convictions, but also with qualifications in science, engineering and office management.

Bin Laden called for select individuals to be trained at Al Qaeda safe houses in Pakistan over a period of months before being sent to launch attacks in the West.

“A person has to be pious and patient,” a planning memo insists, paying tribute to the discretion of the operatives who carried out the 1998 bombing of the U.S. embassy in Nairobi. “Any person we notice who displays boredom, does not finish the tasks assigned to him and gets mad quickly, we have to remove him from external work. In Kenya the brothers stayed inside the house for nine months.”

Bin Laden says he does not need to know the details of the “external work”—Al Qaeda’s term for attacks on Western targets outside the battlefield—for security reasons. “But when the external work was delayed, I found myself forced to contribute to the matter,” he complains, in one of several mentions of his own secrecy concerns.

But things don’t always go according to plan. In another document that CIA analysts believe was written either by bin Laden or a senior Al Qaeda operational leader, the group warns that some recruits are deploying too soon. “The other brothers are new and we rushed to send them very quickly, before their security was exposed or their residency documents expired,” it says.

It cites the example of a volunteer who was only able to stay for two months because he needed to return to the West. “We gave him an academic explosives course and he traveled back before his residency expired and we have not heard from him since he left,” it says. “We hope that we hear from him very soon.”

The undated memo holds out hope that groups sent to Britain and Russia might yet be able to mount attacks, but worries that a three-man squad sent to Denmark had been arrested.

The bind Al Qaeda found itself in was that its experienced jihadists, battle-hardened in Afghanistan, were often known to enemy intelligence agencies and lacked travel papers. Young recruits with the skills and documents to infiltrate the West lacked the patience and training for the war ahead.

Bin Laden’s answer is couched in surprisingly managerial language: “We need a development and planning department.”

Al Qaeda planned to deputize a key lieutenant to pool jihadist research and best practices at a center of excellence, to ensure that the new wave of attackers are effective. “We will send some of the brothers who are bright… to study at universities,” the memo says, promising to create a generation of mujahideen computer engineers, business administrators and political scientists.

Chemists, of course, are in demand, “for manufacturing explosives, which is something we have a dire need for.” But media and communications specialists are also important as bin Laden planned a public relations campaign to mark the 10th anniversary of the September 11, 2001 attacks—a date he did not live to see.