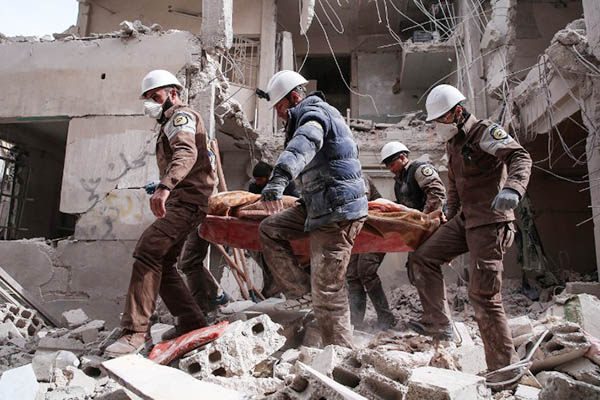 Khaled Khatib, who shot much of the film, hopes it will lead to intervention against daily bombings of civilians.

It was shortly after 6:00 a.m. in Turkey, and Khaled Khatib and his cousin Fadi had dozed off while staying up all night to watch the Oscars. But then they got a phone call from Hollywood from their colleagues in the White Helmets, the Syrian rescue workers who were the subject of a documentary in competition at the Academy Awards.

“I woke up Fadi and screamed ‘Get up quick, our film won the Oscar!’” said Khaled, the 21-year-old who shot much of the footage for the film. He had planned to travel to California as well and had obtained the necessary visa, but he was turned away at the airport after officials said his passport was invalid.

Since winning the Oscar, his phone hasn’t stopped ringing: friends with congratulations or wanting to confirm it was true, and journalists from around the world hoping for interviews.

“When we started working on the film, we weren’t thinking about an Oscar or any other prize. Our main goal was to show the suffering of civilians and show the world the truth about the White Helmets, who risk their lives to get people out of the rubble,” Khaled said. “I hope that people who go to see this film—especially governments and leaders—will intervene to stop the almost daily bombings of Syrian civilians,” he added. “When the film got the award, I knew there was justice in the world, because these people have the hardest job in the world,” Fadi said. “Many of their colleagues have been killed or have had arms or legs amputated.”

Fadi, 23, worked as a cameraman for the film, shooting for nearly two years in the city of Aleppo for the Netflix-produced film from the director Orlando von Einsiedel. “I filmed simple people—carpenters, blacksmiths, street vendors—who joined the White Helmets as volunteers,” Fadi said.

Netflix chief Reed Hastings said he was “thrilled” about the award. “One of the great things about entertainment is just being able to connect people to stories,” he said Monday in Barcelona, where he was attending the Mobile World Congress.

The stories of many of the White Helmets’ anonymous heroes have found audiences around the world thanks to the dramatic videos of their rescues of victims, often children, trapped in buildings bombed by Syrian forces. About 3,300 volunteers operate in 120 centers in rebel-held territory, putting into practice the group’s motto, a line from the Quran: “To save one life is to save all of humanity.”

Since the group was formed in 2013, two years after the war began, 162 White Helmets have died in operations they say have saved 82,000 people.

The group has its critics, often backers of the regime of President Bashar al-Assad who accuse them of being puppets of international donors or of having ties to jihadist groups such as Al Qaeda’s former Syrian affiliate, Fateh al-Sham Front.

“The Syrian regime and Russia spread this information to damage our credibility because we have shown the entire world the crimes they are committing against civilians in Syria,” Khaled said. The group receives funds from several countries, including Britain, The Netherlands, Germany, Japan and the United States.

Government donations to the group reached a record of about $50 million last year, James Le Mesurier, the director of Dutch nonprofit Mayday Rescue, which coordinates the donations, told AFP. And nearly $10 million has been raised from individual donors since 2013, Le Mesurier said in Istanbul, a crucial source of funds—in particular for the rescuers’ white hard hats, which cost about $145 each.