Home Latest News Our Desire for Peace is Not a Sign of Weakness, Says Gen. Bajwa

Our Desire for Peace is Not a Sign of Weakness, Says Gen. Bajwa 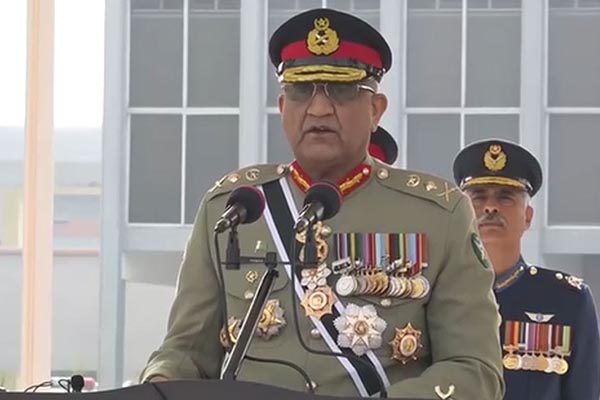 No person or entity will be allowed to misinterpret Pakistan’s desire for peace as a sign of weakness, Chief of the Army Staff Gen. Qamar Javed Bajwa said on Tuesday, as he highlighted the sacrifices that had been rendered for regional and global stability.

“It is time to extend the hand of peace in all directions,” he told the graduation ceremony of the 144th GD (P), 90th Engineering Course and 100th AD courses at Risalpur’s PAF Academy. “Pakistan is a peace-loving country that has rendered great sacrifices for regional and global peace. We stand firmly committed to the ideal of mutual respect and peaceful coexistence,” he said, but warned that the armed forces were “fully capable and prepared to thwart any threat.”

Referring to the Kashmir dispute between Pakistan and India, the Army chief said that the time had come to resolve it in a dignified and peaceful manner in accordance with the aspirations of the people of Jammu and Kashmir. The immaculate coordination and harmony displayed by all three services in operations against the enemies of Pakistan had brought great improvement in the internal security environment, he added.

Gen. Bajwa’s statement comes amidst an ongoing global push for peace in Afghanistan and persistently thorny ties between Pakistan and India. Relations with Delhi have been particularly tense since August 2019, when India unilaterally abrogated Kashmir’s special constitutional status, and imposed a blockade in the region that has yet to be fully lifted.

During his speech, the Army chief specially commended the Pakistan Air Force for the role it had played in the war on terror. “The outstanding courage and professional excellence displayed by brave air warriors of Pakistan Air Force during Operation Swift Retort is a manifestation of our resolve and capability,” he said. “The whole nation is proud of its Air Force and I earnestly hope that PAF will scale new heights of glory and excellence in the years to come,” he added.

Gen. Bajwa hailed the presence of cadets from Saudi Arabia, 11 of whom completed their training at the PAF Academy. “This is a manifestation of warm fraternal ties between Islamic Republic of Pakistan, Kingdom of Saudi Arabia and our Defense Forces indeed,” he said. “We are proud of the strong bonds of Islam, brotherhood and cultural communion that bind us together,” he added.

A total of 133 cadets, including 11 of the Royal Saudi Air Force and 6 women, graduated at the occasion. The ceremony was also attended by PAF Chief of Air Staff Air Chief Marshal Mujahid Anwar Khan.