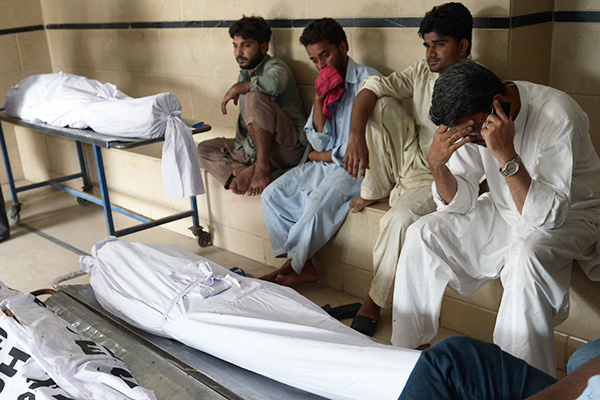 If the government cannot establish a definitive cause for the mass deaths attributed to a persistent heatwave the tragedy is doomed to repeat next year.

In about four days of a heatwave that has gripped the eastern districts of Pakistan from central Punjab down to Sindh, over 800 people have died. Mainstream and social media are blaming the governments—federal and Sindh provincial—for their apathy and mis-governance.

Yet, the reasons for these deaths remain elusive.

First, this is the time of the year when temperatures always soar and settle, for days, in the 40-plus Celsius band, climbing in some places up to 49 Celsius. If memory serves me right, while heat-related deaths were reported in the past, this scale appears unprecedented. There’s an off chance that there was under-reporting in previous years but given that the private TV channel phenomenon is now almost 13 years old and social media has been thriving for at least five years, one can be certain that something like this did not happen at least in the past five years.

Second, the meteorological chart I am looking at shows that Karachi, where the bulk of heat-related deaths have been reported, is not the worst-hit in terms of high temperatures. In fact, until Saturday, June 21, Karachi was not even in the 40-celsius band—yet. But even when temperatures soared to a high of 44 Celsius for a day in Karachi, there were other, hotter areas in Pakistan that did not see the high numbers of heat-related deaths as Karachi did.

Third, there’s some speculation that this is because of fasting. That might well be, but the problem is that last year’s Ramzan also fell in June and that June was no less punishing. I should know, having been in the field at the start of Operation Zarb-e-Azb in North Waziristan. And those who know the city of Bannu and its surrounding areas know the terrible temperatures that hit the district. There were IDPs (Internally Displaced Persons) coming in the thousands every day and most, if not all, were fasting. At least three people in my team were fasting and we were in the field for nearly four days without much rest or sleep. It was punishing but the human body, despite its infirmities, can also show much resilience.

Fourth, I do not have data on the age and socioeconomic groups most affected by this heatwave but my assumption is that children and the old comprise the most exposed age groups. Their vulnerability, however, is an overall factor and can’t be specific to June 2015. In other words, why did June 2014 or 2013 not take the same toll on these age groups?

Fifth, loadshedding has been blamed by some for these deaths. But loadshedding and power shortages are not new phenomena. We have had to put up with shortfalls for several years now. How is it different this year? So, unless it can be proved that Karachi saw unprecedented power cuts in the last four days, the argument doesn’t appear too strong in terms of a single factor as the cause of deaths at such scale. Moreover, several years of power cuts have made people improvise. There are many rural areas in Pakistan that do not have electricity still but the sun comes blazing down, as it has for millennia. That must have resulted in heat-related deaths among the vulnerable but, again, this scale seems unprecedented.

Sixth, I am told that Karachi hasn’t seen sea breeze for four days and that has caused so many deaths. I have no way of knowing that to be a fact. It’s for the experts—climatologists and perhaps doctors—to figure that out. But if that, indeed, is the reason, or a major reason combined with other, auxiliary factors, then it relates, possibly, to a broader, global problem. To expect the Sindh government, which does not even possess municipal-level IQ, to grapple with something at that scale would be to expect the Islamic State militants to start charity work around the world.

It would, however, require something else: the governments—provincial and the federal—will have to take other measures to ameliorate the effects of climate change, as best as they can. But that would mean focusing on policy areas that are the most neglected in terms of governance and provision of basic services.

The starting point, of course, would be to first determine, scientifically, what has actually caused so many deaths. It should be obvious that without such determination no measures can be adopted to address the problem. So far, both the Sindh government and the media seem to be shooting their mouths off without any real understanding of the causes of deaths at such scale.

The chief executive of Sindh, the ante-diluvian chief minister Qaim Ali Shah, does not seem to know any of this. In fairness to him as well as in the public interest, he needs to be put back in Noah’s Ark and sailed off to the edge of the world. That won’t put things right automatically but it might just make space for someone who can actually start doing the job for which people elect a C.M.

Finally, if we are unable to determine the cause or causes of these deaths scientifically, continuing instead to speak from the gut, we will see the tragedy repeated next year.

Good detailed study. But real cause remains apathy. In illiterate masses epidemics are commonly a regular feature. Because of ignorance of people the responsible get away easily.