Ousted Egyptian President to be Tried for Insulting Judiciary 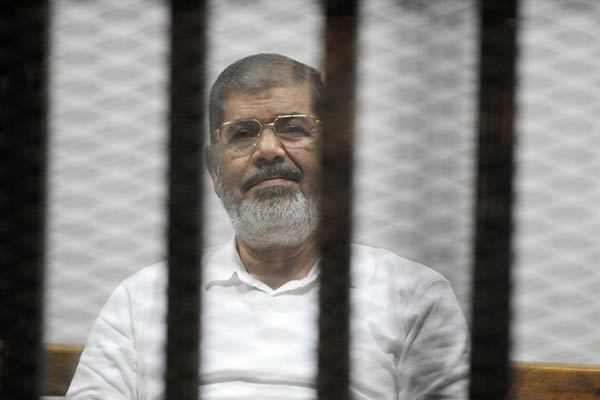 Mohamed Morsi and 24 others, including prominent figures, will all go to court on May 23.

Ousted Egyptian president Mohamed Morsi and 24 others, including prominent Islamists and secular figures, will go on trial May 23 for insulting the judiciary, a court official said Wednesday.

The trial will be the fifth for Morsi, who faces the death sentence if convicted in the other cases for espionage and violence. Morsi and the others are accused of having shown disrespect to court rulings in comments on social media and in interviews.

Among the defendants is Alaa Abdel Fattah, one of the activists who called for protests that led to the downfall of former president Hosni Mubarak in 2011.

Already in prison for participating in an illegal protest in November 2013, he has been charged over comments on Twitter several months ago about legal proceedings concerning 2011 raids on the offices of foreign civil society groups.

Amr Hamzawy, a well-known political science professor and former member of parliament, and human rights lawyer Amir Salem will also stand trial. Along with Abdel Fattah, they backed the army’s 2013 ouster of Morsi.

Since then, the government has cracked down on the opposition, with hundreds dead and thousands more jailed after often speedy mass trials. The government has branded the Muslim Brotherhood as a “terrorist group.”