Ousted P.M. Sharif Says His Dismissal Was ‘Insult to Voters’ 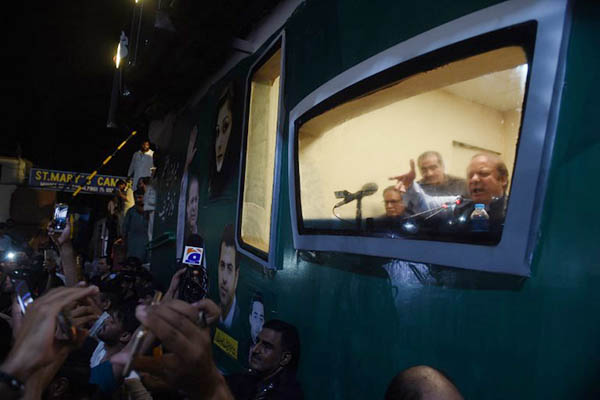 In speech during ‘homecoming’ procession, PMLN chief urges followers to stand up for the ‘rule of law’

Former prime minister Nawaz Sharif on Wednesday said the Supreme Court’s decision to depose him last month was a “joke” and an insult to voters as he addressed a rally in Rawalpindi.

The speech marks the first time Sharif has publicly commented on the court’s ruling and comes as the former prime minister leads a defiant procession from Islamabad to his party’s stronghold in Lahore. “I was not allowed to complete my third term,” he said from a bombproof vehicle specially designed for the journey. “No prime minister in Pakistan has ever been allowed to complete his term. This joke has been repeated for 70 years and Pakistan can no longer bear it, it’s an insult to the voters,” he said.

Sharif asked thousands of supporters to stand up for the “rule of law” and the mandate they had given him.

The procession took 12 hours to travel just 20 kilometers from the capital to Rawalpindi. Sharif said he would stay the night there before continuing towards Lahore, where he hopes to bring tens of thousands into the streets in a show of force.

Thousands of police earlier sealed off main streets in Islamabad and surrounding areas as fears lingered over security after a truck bomb exploded in Lahore Monday, killing one person and injuring dozens.

Supporters clogged the streets in the capital, waving flags and chanting political slogans. “The Supreme Court’s judgment to disqualify him is disputed, so people have not accepted it,” said Sharif supporter Arshad Iftikhar, a retired government official.

Others lining the route voiced frustration with the political elite. “Around 50 percent of the people here are those who have just come to watch the scene,” said bystander Nazakat Ali. “These politicians are not doing any good for the people.”

Sharif was the 15th prime minister in Pakistan’s 70-year history—roughly half of which has been spent under military rule—to be ousted before completing a full term. The top court sacked him last month after an investigation into corruption allegations against him and his family, bringing his historic third term in power to an unceremonious end and briefly plunging the nation into political uncertainty.

The controversy erupted last year with the publication of 11.5 million secret documents from Panamanian law firm Mossack Fonseca documenting the offshore dealings of many of the world’s rich and powerful. Three of Sharif’s four children—including his daughter Maryam Nawaz, his presumptive political heir—were implicated in the papers.

Fresh questions have arisen over how Sharif’s ruling Pakistan Muslim League (Nawaz) plans to replace the ousted premier. The PMLN initially named his younger brother Shahbaz as his eventual successor and Shahbaz was set to contest an upcoming by-election to enter Parliament.

But media reports this week said the party appeared to backtrack on the plans, saying the PMLN would likely keep newly elected Prime Minister Shahid Khaqan Abbasi in place until next year’s general elections.