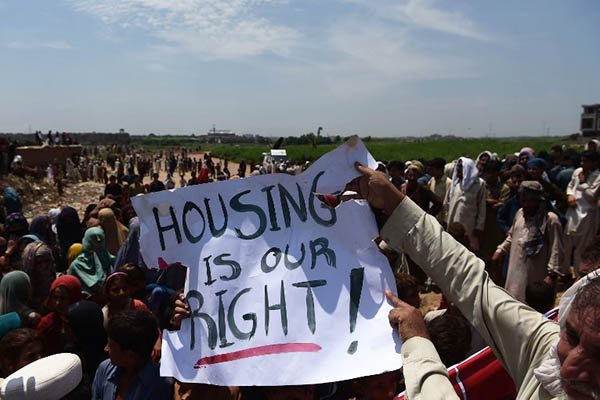 In a court filing, Capital Development Authority had claimed it needed to demolish slum as they might change city’s religious demographic.

In 2014 the Capital Development Authority declared a war against illegal slums in affluent Islamabad, saying the areas—known as “katchi abadies” in Urdu and largely populated by Christians and Afghan refugees—are illegal and havens for militants. The drive rendered hundreds homeless and stirred anger with demonstrations held to try to stop the bulldozers.

The leftwing Awami Workers Party (AWP) launched a Supreme Court bid against the drive, with the court ordering written justification from the CDA for its actions. In the reply submitted last week—which has also been criticized for its poor English—the CDA states: “It seems this pace of occupation of land by Christian community may increase… removal of katchi abadies is very urgent to provide better environment to the citizen of Islamabad and to protect the beauty of Islam.”

The report sparked a swift backlash, with rights activists holding a rally in the capital against what they call the “discriminatory” stance.

Ammar Rashid of the AWP told AFP the move was “old-fashioned bigotry against minorities and working classes.”

“The administrative body has no right to be making decisions about the religious demography of Islamabad,” he said. “Action should be taken against whoever drafted the report,” said Farzana Bari, a human rights activist.

Most Christians in the city are sanitary workers, she said. “These poor Christians that the CDA is so scared of are their own employees who work very hard to keep the city clean,” she said. “It seems the Christians would now require passports to live in the capital,” Shamoon Gill, a Christian activist said.

Designed by Greek architect Constantinos Apostolou Doxiadis, Islamabad was founded in 1960 as a purpose-built capital. Its wide boulevards and grid design set it apart from most South Asian cities, but also mean it offers little accommodation for the lower-classes who work as laborers or domestic workers.

The katchi abadis are tucked into corners of the grid and house tens of thousands of people unable to afford the city’s high rents in flimsy dwellings of concrete, bricks and sacking. Official figures on the city’s religious demographics are not available, but rights activists have estimated the Christian population at roughly 50,000 out of around 530,000.