Over 100 Killed in Monsoon Rains 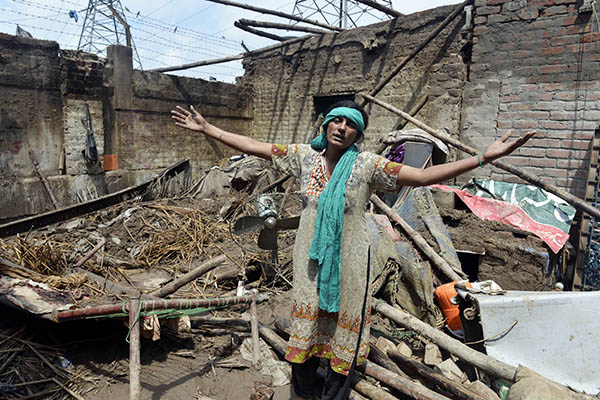 Torrential monsoon rains have killed at least 106 people over the past three days and damaged thousands of houses, officials said on Saturday as authorities put four districts on red alert for flooding.

Most of the deaths were caused in Punjab province and in Pakistan-administered Kashmir, primarily by roof collapses, electric shocks and landslides.

In Punjab, the death toll has risen to 55 with some 235 people injured due to torrential rains, according to Rizwan Naseer, the director general of rescue services in the province. Naseer said the waters had started receding in many areas of Lahore and other districts, but the situation was still precarious in four districts, namely Jehlum, Sialkot, Nankana Sahib and Narowal.

“A red alert has been issued for these four districts as flooding is expected if water comes from India,” Naseer said.

In Pakistan-administered Kashmir at least 48 people have been killed and 87 injured so far, said Akram Sohail, chairman of the disaster management agency in the capital Muzaffarabad. In addition, three soldiers died in a mudslide Thursday near the de facto border with India.

Sohail said authorities were trying to reach remote mountain villages in the Neelum valley along the Line of Control, but their efforts have been hampered by landslides. “The landslides caused by rains have damaged some 4,000 houses in Kashmir, more than half of them have been destroyed,” Sohail said.

Pakistan has suffered deadly monsoon floods for the last four years—in 2013, 178 people were killed and around 1.5 million affected by flooding around the country.

Troops have been mobilized for flood relief duties in eastern Punjab. Eight Army helicopters and 80 boats were taking part in rescue operations around the province, the military said on Friday.

Prime Minister Nawaz Sharif on Saturday presided over a high-level meeting to review the situation and directed the authorities to expedite the rescue and relief effort, a statement issued from his office said. In his briefing for the premier, National Disaster Management Authority (NDMA) chairman Maj. Gen. Muhammad Saeed Aleem said Lahore and Rawalpindi were experiencing serious flooding. There was also flooding along the major Chenab and Jehlum rivers while drainage streams, especially in the cities of Gujranwala and Rawalpindi, were also flooded, Aleem said.

The floods of 2010 were the worst in Pakistan’s history, with 1,800 people killed and 21 million affected in what became a major humanitarian crisis.