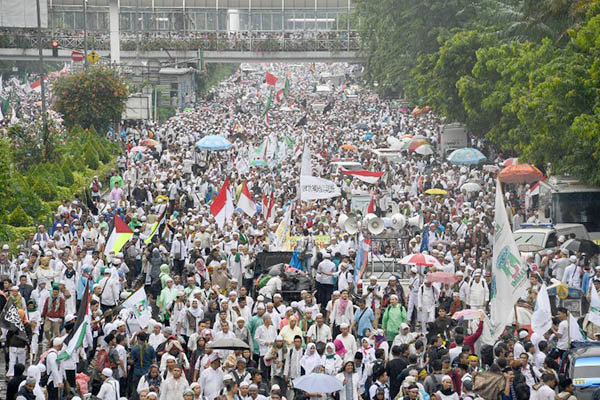 More than 200,000 Indonesian Muslims prayed in unison and chanted Quranic verses on Friday in the second major demonstration against Jakarta’s Christian governor, as conservative groups push for his arrest for allegedly insulting Islam.

People in white Islamic robes and skullcaps packed out a massive park in the capital, with over 20,000 security personnel deployed to prevent a repeat of violence that erupted at the last protest against Basuki Tjahaja Purnama.

Purnama, known by his nickname Ahok, is being prosecuted for blasphemy over election campaign comments he made about the Quran, which have sparked widespread anger in the world’s most populous Muslim-majority country. The case is seen in part as a test of religious tolerance in Indonesia, where a reputation for pluralism has been eroded by a surge in attacks on minorities, but critics say it is also about politics as the governor’s foes whip up anger to reduce his support.

The decision to prosecute Purnama, Jakarta’s first non-Muslim governor for half a century and a member of the country’s tiny ethnic Chinese minority, has not been enough to quell anger and conservative groups are now demanding his arrest.

Protesters waved banners that read “Jail Ahok” as they marched en masse through the city’s streets in the early hours to converge on the park, which surrounds the National Monument, a tall tower that looms over downtown Jakarta. “Let’s defend our religion,” Rizieq Shihab, leader of hardline group the Islamic Defenders’ Front (FPI), told the crowd as he delivered a fiery sermon. “Stop all forms of religious blasphemy and put all violators on trial.”

President Joko Widodo, an ally of Purnama who has been meeting with Islamic and political leaders in recent days to calm tensions, joined the mass prayer, thanking the protesters for being peaceful and urging them to return home.

Jakarta police spokesman Raden Prabowo Argo Yuwono said more than 200,000 joined Friday’s rally, dwarfing the last protest on Nov. 4. He said it had passed off peacefully and protesters were starting to head home.

Meanwhile police said eight people were detained in early morning raids on suspicion of treason before the protest, with reports saying they included the sister of an ex-president and a retired general. They did not release details about what they were accused of but observers have expressed fears that opponents of Purnama and Widodo could try to take advantage of the chaotic protests to destabilize the government.

The November rally drew 100,000 Muslims onto the streets. It was peaceful during the day but descended into violence as night fell, with hardliners hurling missiles and setting fire to police cars, leaving one person dead and hundreds injured.

In a bid to prevent violence at Friday’s rally, authorities and Islamic leaders agreed to restrict it to the park and end the event in the early afternoon.

Purnama is due to face trial and could be jailed for up to five years if found guilty of breaking Indonesia’s tough blasphemy laws.

The controversy started in September when the governor accused his opponents of fooling the electorate by misusing a Quranic verse to persuade voters not to support him in governorship elections. Purnama’s opponents said the verse forbids Muslims from choosing non-Muslims as leaders.

Purnama has apologized for the remarks, saying he was criticizing his political rivals who were using the verse rather than the Quran itself, but the scandal has seen him slip into second place in the polls. He had long been the favorite to win the February election, popular for his no-nonsense style and determination to clean up Jakarta, a crowded, polluted metropolis of 10 million.