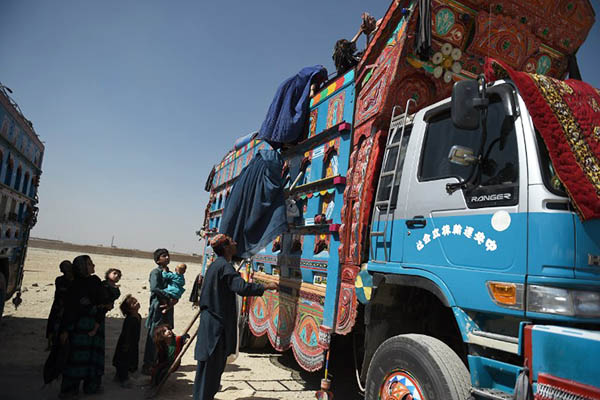 More than 380,000 registered Afghan refugees have returned from Pakistan this year, the highest number since 2007, the United Nations said on Friday, adding it handed out $135 million in cash assistance in the last three months alone.

Fears of a crackdown on refugees in Pakistan along with a doubling of the U.N.’s cash grant for voluntary returnees to $400 saw a surge over the border after July this year, the U.N. has said. “These are unprecedented numbers we did not anticipate. In October alone some 148,000 returned, which is the highest number of returns in one months [sic] since August 2005,” Duniya Aslam Khan, a spokesman for UNHCR, told AFP.

At one point UNHCR was processing an average of 5,500 refugees per day, she added. Estimates suggest that a further half a million unregistered refugees may also have returned this year, though the figure could not be verified by officials.

The returnees face an uncertain future in an Afghanistan still torn apart by decades of war, where a record half a million people were internally displaced by the fighting in 2016, according to U.N. figures.

UNHCR said on Friday the voluntary repatriations will be halted from Dec. 1 for a routine winter break, resuming in March. The break will also allow the agency time to mobilize additional resources, Khan said.

UNHCR had estimated just 50,000 refugees would return in 2016, based on trends from previous years. Khan said some 1.34 million registered refugees still reside in Pakistan. A further half a million undocumented refugees are also estimated to still be in the country, making Pakistan one of the largest refugee-hosting nations in the world.

Pakistan has extended a deadline for the refugees to leave its territory from March 2017 to December next year. Some Afghan refugees have been sheltering in Pakistan for decades, first fleeing over the border after the Soviet invasion of 1979.

Some 4.2 million Afghan refugees have returned to Afghanistan voluntarily under the UNHCR-funded Voluntary Repatriation program since 2002.