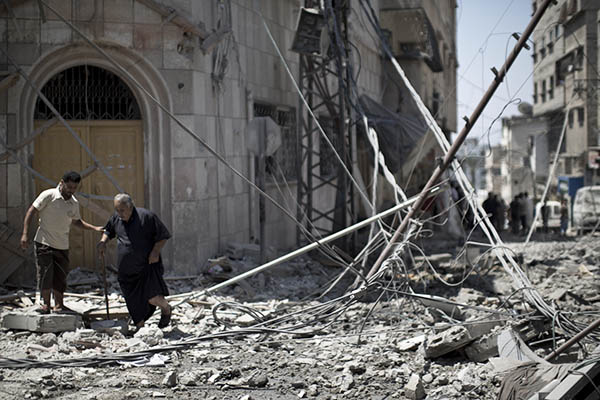 U.S. airlines lifted a flight ban to Israel on Thursday as Washington’s top diplomat cited progress in ending 17 days of bloodshed in Gaza that have left 718 Palestinians dead.

The ban was lifted just hours after U.S. Secretary of State John Kerry wrapped up talks in Jerusalem and Ramallah and returned to Cairo to continue pushing regional efforts to ink a ceasefire. Hamas had hailed the suspension of Tel Aviv flights by U.S. and European airlines as a “great victory for the resistance.”

“The FAA has lifted its restrictions on U.S. airline flights into and out of Israel’s Ben Gurion Airport,” the U.S. national aviation agency said early Thursday, two days after imposing a ban on commercial flights when a rocket hit a house very close to the runways. But it warned the situation was still “very fluid” as the fighting raged on in Gaza. There was no immediate word on whether European airlines would follow suit.

As truce efforts mounted, Hamas’s exiled leader Khaled Meshaal vowed there would be no end to the fighting without the lifting of Israel’s eight-year blockade on Gaza. “We will not accept any initiative that does not lift the blockade on our people and that does not respect their sacrifices,” he said.

Meanwhile on the ground, 21 people were killed as Israel continued to strike Gaza, among them a family of six, including a five-year-old girl and boy of three. And the Red Cross said it had negotiated agreement with the two sides to take a convoy of 10 ambulances into the battered Khuzaa district, which lies on the Israeli border, close to the southern city of Khan Yunis, which has seen intensive fighting between Israeli troops and Palestinian militants over the past 24 hours.

A similar rescue mission on Wednesday enabled medics to evacuate 150 people from Khuzaa, 70 from the northern town of Beit Hanun, and another group of people from Shejaiya near Gaza City, including an entire family of 11, according to ICRC spokeswoman Cecilia Goin.

As U.S. Secretary of State John Kerry and U.N. chief Ban Ki-moon held talks in Jerusalem, they said they had pooled their efforts in the hope of boosting the quest for a truce. “We are now joining our forces in strength to make a ceasefire as soon as possible,” Ban said as he met Kerry for the second time this week, following initial talks in Cairo on Monday. “We have in the last 24 hours made some progress in moving toward that goal,” Kerry said as he met President Mahmud Abbas in the West Bank city of Ramallah, before heading to Tel Aviv for talks with Israeli Prime Minister Benjamin Netanyahu.

The men met for about two hours but made no statements after their talks. Kerry then left for Cairo and Netanyahu opened a meeting of his security cabinet.

Britain also joined the truce efforts with new Foreign Secretary Philip Hammond holding late-night talks with Abbas, saying a ceasefire was not enough. Ban also brought up the Gaza conflict in a meeting with Saudi King Abdullah in Jeddah, according to the official SPA news agency.

Palestinian medics said Israeli attacks on Thursday hiked the death toll to 718 with a Gaza-based rights group saying more than 80 percent of them were civilians. The Israeli army said three more soldiers were killed in combat inside Gaza on Wednesday, raising the total number of soldiers killed since the start of a ground operation on July 17 to 32.

A Thai farm laborer also died when a rocket fired from Gaza struck the greenhouse where he was working in southern Israel, police said.

Kerry began his regional mission in Cairo, discussing ceasefire proposals with Egyptian President Abdel Fattah al-Sisi, that he said provided a “framework” to end the fighting.

An initial Egyptian proposal calling for a halt to hostilities ahead of talks was accepted by Israel early last week but rejected by Hamas, which wants agreement on a comprehensive package before holding its fire. A senior Hamas official in Cairo said the militants wanted detailed guarantees that Israel would ease its blockade of the enclave, but said he hoped talks would bear fruit “in a few days.”

“The atmosphere in the talks is positive,” he said in a telephone interview.

The Gaza-based Palestinian Center for Human Rights said 81.5 percent of the dead were civilians, 24 percent of them children. As the violence raged, the U.N. Human Rights Council voted to launch a probe into Israel’s Gaza offensive, with the U.S. the sole member to vote against as European countries abstained.

A statement from the Israeli prime minister’s office said the council’s decision was “a travesty and should be rejected by decent people everywhere.”