Home Latest News Over 800,000 BISP Beneficiaries to be ‘Exited’

Special Assistant to the P.M. on Social Welfare says forensic data analysis identified people who are ineligible for support

The Pakistan Tehreek-e-Insaf-led government has decided to bar over 800,000 people from availing the Benazir Income Support Program, utilizing data to weed out families of government employees and those with vehicles registered against their names.

In a tweet posted on Tuesday, Special Assistant to the Prime Minister on Social Welfare and Poverty Alleviation Sania Nishtar said that the federal cabinet had approved her proposal to exit 820,165 “undeserving” beneficiaries of the BISP.

The BISP has been a sore spot for members of the incumbent government, with lawmakers claiming that the program benefits supporters of opposition parties—especially backers of the Pakistan Peoples Party—while ignoring those who backed the ruling PTI.

Nishtar on Tuesday told the federal cabinet that in light of their complaints, she had utilized forensic data analysis with the help of the National Database and Registration Authority to highlight beneficiaries who were “undeserving.” She highlighted several factors that were considered, including whether or not a beneficiary or their spouse was employed with the government; owned a car or motorcycle; had traveled abroad; or had a monthly phone bill exceeding Rs. 1,000.

Launched in July 2008, the BISP is the country’s largest social safety net, catering to women and benefiting around 5.4 million people, according to data released in 2016. Despite acrimony between the PPP, which launched the program, and the Pakistan Muslim League (Nawaz), the program was continued due to its aim of helping women achieve independence, and to encourage entrepreneurship. 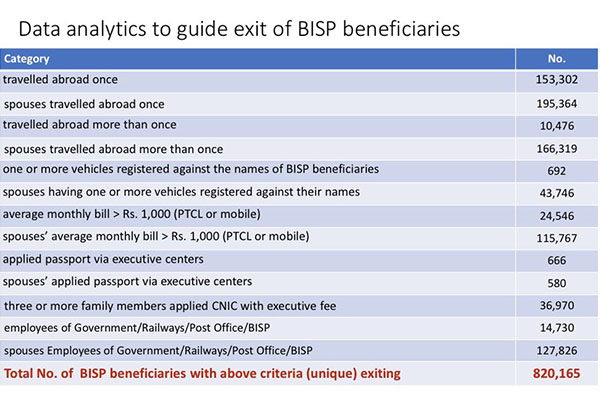 For seeking passports via executive centers, 666 beneficiaries were excluded; 580 were exited because their spouses availed the service. Additionally, 36,970 people were expelled from the list because three or more family members paid executive fees for obtaining computerized national identity cards.

Slamming the move, Bakhtawar Bhutto-Zardari, daughter of former prime minister Benazir Bhutto, said the government was depriving poor women of a monthly stipend on weak criteria. “Almost 1 million beneficiaries of the only social safety net for women are cut off for meeting just one of the ridiculous criteria. Shameful that the idea of further suppressing and taking away independence of a woman came from a woman. Cut off from monthly stipend because of her husband’s phone bill,” she said on Twitter.

i appriciate this data of audit,and suggest re check all beneficiary details thorough,third party audit,and all the govt servents who has avail this ,which was not allowed,they should be send demand notes,and in case they do not return public tax money,they should be fired from govt jobs

This is a brilliant idea to kick out rich womens from bisp.
And how can we check that we’re exited or not?