Over 900 Terrorists Killed in Zarb-e-Azb: ISPR 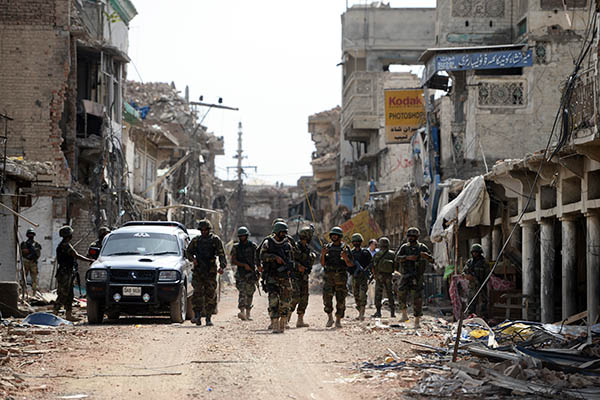 Military statement confirms over 97,000 families have been displaced from North Waziristan during the ongoing military operation.

The Pakistan Army on Wednesday announced that Operation Zarb-e-Azb, launched in North Waziristan on June 15 to rid the region of the Pakistani Taliban, was “progressing as per plan” and 910 terrorists had been killed.

In a statement issued early in the morning, the Inter-Services Public Relations (ISPR) Directorate said that Miranshah, Mir Ali, Datta Khel, Boya and Degan—considered militant strongholds—had all been cleared of militants. It added that Pakistan’s armed forces had found and destroyed 27 IED factories in addition to one rocket factory and one ammunition factory during the operations.

“Huge cache of arms and ammunition, communication equipment and other logistics facilities” have been destroyed, according to the statement, which claimed 2,274 counter-terrorism operations have been conducted to minimize retaliation from the terrorists. Forty-two terrorists have been killed and another 114 captured during these, it added.

According to the ISPR statement, 82 soldiers have died—42 in North Waziristan, 23 in the rest of FATA, and 17 in the rest of the country—since the operation started, while 269 have been injured.

The ISPR also confirmed that 97,570 internally displaced families from North Waziristan had registered for relief across the country. According to the United Nations Office for the Coordination of Humanitarian Affairs, this comprises over 1 million people.

Pakistani jets and artillery began hitting rebel targets in mid-June to try to regain full control of North Waziristan and ground forces moved in on June 30. The assault was launched after militants attacked Karachi airport, killing dozens of people and marking the end of a faltering peace process with the Pakistani Taliban. The Pakistani Taliban and the Islamic Movement of Uzbekistan claimed joint responsibility for the Karachi airport attack.

Zarb e azab was difficult task but not for our brave army .After the operation the settlement of displaced people is a big issue as many of them have lost their houses , their jobs , their schooling. In Bannu where the IDPs camps have been placed people are helpless , actually the attention of army is diverted because of this on going political crisis . hence , the main role of army is to defend our boarders , but unfortunately it has been trying to involve army in political process which is unfair , our army is not interested to control the current situation . i think this is the big achievement of our army that they have defeated terrorists, as a result our law n order situation is satisfactory and this credit goes to our brave and devoted army .But shame on the so called corrupt leaders who waste not only their time but also deciding about the fate of public ,,,,,,,,,shame