Overseas Pakistanis ‘More Patriotic’ Than Those in Pakistan: Imran Khan 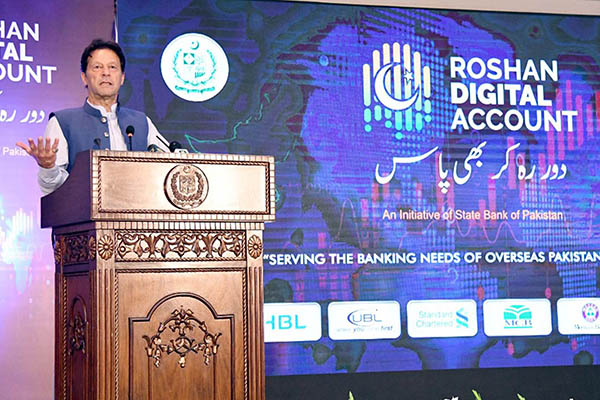 Questioning why dual nationals in Pakistan are considered “traitors,” Prime Minister Imran Khan on Thursday declared overseas Pakistanis “more patriotic” than people whose lives are entirely based in their homeland.

Addressing a ceremony in Islamabad to launch the Roshan Digital Account for overseas Pakistanis, he said that people who look at overseas Pakistanis with “suspicion” should realize that they tend to be even more patriotic than people living in Pakistan. “We must understand why these nine million people left in the first place. We were unable to provide them jobs. And a lot of them acquired qualifications from abroad. They are so qualified that we do not have suitable jobs for them here. And for the jobs that we do have here, we cannot afford to pay the remuneration they deserve,” he said.

“We do not have a bigger asset than that [overseas Pakistanis]. Best minds, professionals and entrepreneurs are outside the country. When we will create conditions in the country, this big resource pool can return to the country,” he said, adding that Shaukat Khanum Memorial Hospital had attracted overseas Pakistanis due to its facilities. “Similarly, all major hospitals in the Middle East are being run by foreign doctors; rather the entire Middle East was established by foreigners,” he said.

The prime minister apparently had forgotten that prior to his elections, he was among the chief critics of dual nationals holding any kind of public office. In various press appearances in 2012, he claimed that while it was ok to grant dual nationals the right to vote, they should “not be in the cabinet or have a role in enacting legislation.” Similarly, he had said they could not be allowed to influence national policies. This belief appears to have been altered with his appointment of dual nationals to his own cabinet.

Terming the Roshan Pakistan Digital Account a historic step, Khan expressed the hope that it would help increase the investment of overseas Pakistanis in the country. He said that Pakistan’s exports had not suffered as greatly during the COVID-19 pandemic as other countries, but noted that until they increased to pre-coronavirus levels, expatriates should be encouraged to invest.

He said the government’s policies would create a “construction boom” in the country and urged overseas Pakistanis to avail this opportunity.

Noting that nearly half the government’s revenue was spent on repaying loans, he said the country needed to move toward wealth creation. “We need to increase our economic activity to an extent where we are able to comfortably pay off these loans, and keeping this in mind, the government offer an incentive package to the construction sector, which supports 30 other sectors,” he said.

He said the devaluation of the rupee had led to inflation and stopped people from investing in the country. “This is why we need dollar investments from overseas Pakistanis. We have seen an increase in remittances but now wish for there to be greater investment in the country,” he added.

The Roshan Pakistan Digital Account allows overseas Pakistanis to remotely open bank accounts in Pakistan through a digital process that does not require them to visit any bank branch, embassy or consulate. An official statement by the State Bank of Pakistan says that eight commercial banks of Pakistan are involved in it, and that an account could be opened within 48 hours of submission of all required documentation. The customer can choose to open a rupee-dominated account, a foreign currency one or one with both, and funds in the account would be fully accessible without the need for any regulatory approval.

The P.M., during his speech, congratulated State Bank Governor Reza Baqir and adviser on Finance Abdul Hafeez Shaikh and their economic think tanks for the “first big step” in taking the country to great heights.