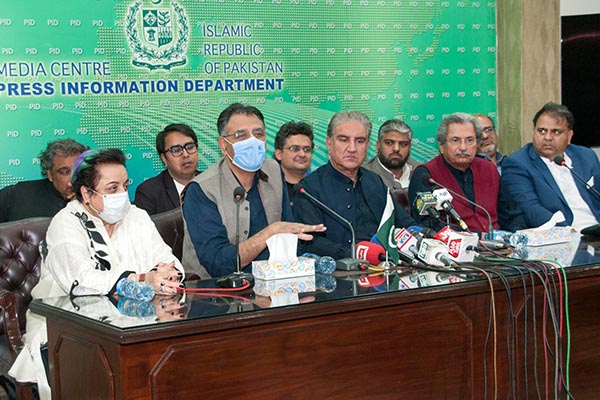 Opposition demands premier resign, as government alleges rigging in Senate polls for the loss of its candidate on a general seat from Islamabad

Prime Minister Imran Khan has decided to seek a fresh vote of confidence from Parliament following the ruling Pakistan Tehreek-e-Insaf’s loss of a Senate general seat from Islamabad to the opposition’s Pakistan Democratic Movement, government spokespersons announced on Wednesday night.

Addressing a press conference a few hours after the PTI’s loss was announced by the Election Commission of Pakistan, Foreign Minister Shah Mehmood Qureshi reiterated his government’s claims of the polling being ‘rigged’ by the opposition through corrupt practices. “Those [lawmakers] standing with Imran Khan will be seen on one side and those who are not, and think they like the ideology of the PPP and PMLN, have every right to join their ranks,” he said in the conference, which saw a bulk of the federal cabinet on stage, including Planning Minister Asad Umar, Human Rights Minister Shireen Mazari, Education Minister Shafqat Mehmood, Science and Technology Minister Fawad Chaudhry, and various special assistants and advisers to the P.M.

Qureshi claimed that that the Senate elections had vindicated the prime minister’s belief that seats to the Upper House of Parliament were bought and sold by the highest bidders. Recounting the government’s claimed attempts at encouraging transparency in the polls, he accused the opposition of going against the Charter of Democracy by refusing to end the practice of secret ballot in the Senate elections.

“We informed the ECP of its constitutional duty to ensure free and fair elections,” he said, and accused the institution of failing in its mandate to ensure transparency in the polls. “I say this because as per our fears, video and audio surfaced a night before the elections” and the PTI’s attempts to seek ECP’s action were blocked by the absence of any officials of the institution at its office, he said, adding that at this point they should have realized the great responsibility to ensure transparency in polls.

Qureshi claimed the prime minister’s struggle was one of “good versus evil,” and credited Khan with transforming the country’s political culture. “In this fight, the nation is watching who stands where,” he said. “I want to assure the voters who cast their vote for the [PTI] that the fight will go on,” he said and urged them to continue supporting the party in its fight against the opposition’s Pakistan Democratic Movement.

“Today is a sad day for democracy. Those who claimed to be the torchbearers of democracy have killed the principles of democracy,” he added.

The press conference followed the PPP’s Yousaf Raza Gilani—as a joint candidate of the PDM—defeating the PTI’s Abdul Hafeez Shaikh by five votes on the Islamabad general seat for the Senate. Seven votes cast for the seat were rejected, with reports that three PTI ministers’ votes were discarded because they didn’t mark the ballots correctly.

Earlier, addressing a press conference in Islamabad, PPP Chairperson Bilawal Bhutto-Zardari hailed Gilani’s win as a victory for democracy in Pakistan. “If he [Khan] has any honor, then he should resign himself,” he said, claiming the demand was no longer restricted to the opposition, but had also found support on the treasury benches.

Declaring Gilani’s win “historic,” Bhutto-Zardari said it was a virtual “no confidence” on IMF dictations that had resulted in rampant inflation and unemployment. He vowed that the PDM’s struggle would “soon” send the incumbent government packing, adding that the opposition would soon meet to decide on its next course of action.