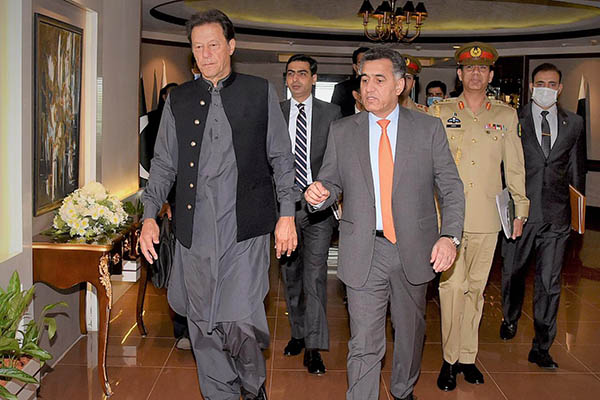 Notified in January, the body seeks to boost cooperation between various intelligence agencies of Pakistan

Prime Minister Imran Khan on Wednesday chaired a “special meeting” of the National Intelligence Coordination Committee (NICC), a body formed to aid in the liaising of the country’s various spy agencies.

Conducted at the Inter-Services Intelligence (ISI) headquarters in Islamabad, the meeting was attended by Interior Minister Sheikh Rashid Ahmed, Information Minister Fawad Chaudhry, heads of the services’ intelligence agencies, the Intelligence Bureau and the Federal Investigation Agency. “Lt. Gen. Faiz Hamid, director general of the ISI, welcomed the P.M. and federal ministers,” read a statement issued by the Prime Minister’s Office on the meeting. It said that the NICC was a dedicated platform for “intelligence coordination/cooperation for unified and wholesome National Intelligence Assessment,” adding that it had been officially notified by the federal government on Jan. 22, 2021.

“A comprehensive briefing followed by discussion on enhanced intelligence cooperation was held,” read the press release. It said that the prime minister had appreciated ongoing efforts of intelligence agencies, and “expressed satisfaction over the performance of National Intelligence Coordination Committee.”

Earlier, the government had announced that the ISI chief would serve as convener of the NICC, while a senior official of the IB would serve as its secretary. In total, there are more than 24 intelligence organizations operation across Pakistan. Officials have long supported reforms in their coordination efforts to optimize the capability of available intelligence.

The need for greater coordination between Pakistan’s various intelligence agencies was also conveyed by the Abbottabad Commission, a judicial inquiry tasked with investigating the discovery and subsequent assassination by the U.S. of Al Qaeda founder Osama bin Laden. A leaked portion of the report had proposing establishing a centralized agency to boost synergy in the working of the country’s spy agencies.