P.M. Khan Launches ‘No One Sleeps Hungry’ Program for Needy 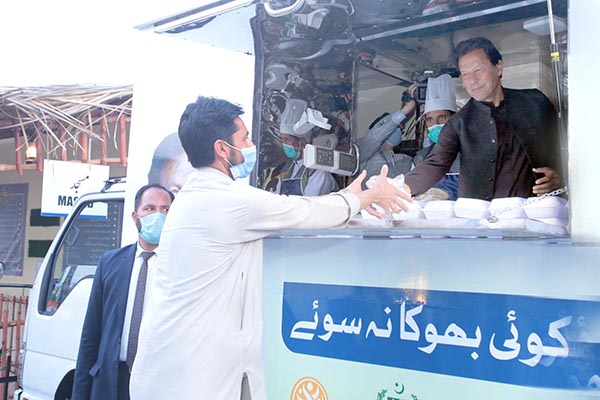 Under the initiative, trucks will distribute food to the impoverished to help them cope with inflation, unemployment

Launching the government’s Koi Bhooka Na Soye (No One Sleeps Hungry) program in Islamabad on Wednesday, Prime Minister Imran Khan claimed it was the beginning of Pakistan’s transformation into a welfare state.

Through this program, he told media, the impoverished would be provided free meals twice a day through trucks that would travel between various points of Rawalpindi and Islamabad. The program would eventually be expanded nationwide, he said, adding that these mobile kitchens would specifically target the needy.

According to Khan, the trucks had been directed to visit areas with large populations of poor and laborers to ensure that the free meals reached the most deserving people. He said that the government would review the program in the capital to identify any potential problems before it was expanded, adding that his dream was to see it realized nationwide.

In the pilot phase, two Ehsaas food trucks are serving food at various points in Rawalpindi and Islamabad, including outside hospitals, and bus stations. Authorities claim each truck would be equipped with resources to feed two meals per day to around 2,000 people, adding that the aim was to cater to people who could not travel to the Panagah shelter homes.

Special Assistant to the P.M. on Social Protection Sania Nishtar said the program would provide lunch and dinner in both urban and rural areas. The Poverty Alleviation and Social Safety Division has established a ‘Donor Coordination Group’ to encourage the private sector to fund the initiative.

During the launch ceremony, the prime minister also formally announced that the government was planning to initiate—from June—a new program of direct subsidies that would help 30 million families get essential food items. He said the program, part of the larger Ehsaas umbrella, would provide funds to the needy to help them buy essential items regardless of inflation. He claimed that the government was also considering a similar program for farmers to help them get fertilizer and other agricultural needs at subsidized rates.

Khan also urged authorities concerned to ensure that the public that was availing the charity programs—whether Panagahs, Langars, or Koi Bhooka Na Soye—were treated with dignity. He noted that many philanthropists wanted to fund such programs, adding that successful implementation in Islamabad and Rawalpindi would help win their trust to encourage nationwide expansion.