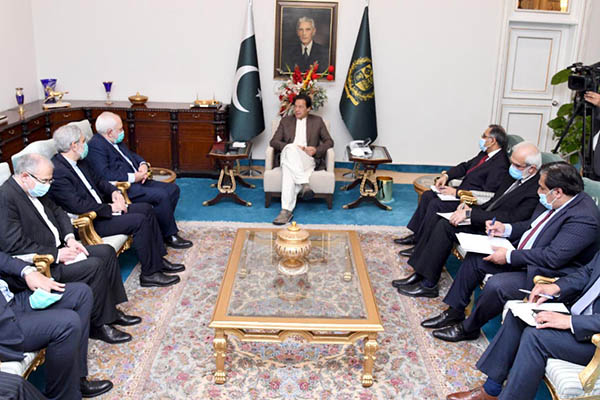 Prime Minister Imran Khan on Wednesday stressed enhancing bilateral cooperation between Pakistan and Iran, adding that special focus should be placed on trade and economic relations.

During a meeting with Iranian Foreign Minister Javad Zarif in Islamabad, he said that the neighboring nations enjoyed cordial relations and should further strengthen their ties for mutual benefit. He also extended his condolences over the nearly 40,000 people who have died in Iran due to the COVID-19 pandemic.

The prime minister credited the “smart” lockdown strategy, as well as government-issued preventative measures, for significantly containing the pandemic in Pakistan.

Underscoring the need to work closely for peace, security and development of the region, Khan highlighted Pakistan’s efforts to facilitate peace and stability in Afghanistan. He reiterated his belief that the Afghan conflict could only be resolved through diplomatic, and not military, measures.

Reaffirming Pakistan’s support for an Afghan-led and Afghan-owned peace process, the prime minister reiterated his hope that all Afghan stakeholders would seize the historic opportunity for a political settlement. He said peace in Afghanistan was beneficial for the entire South Asian region, noting that it would increase regional connectivity and create new opportunities for trade and economic cooperation.

Zarif conveyed his personal greetings to the prime minister and reiterated President Hassan Rouhani’s commitment to work closely with Khan to further strengthen bilateral cooperation in various fields. He also reaffirmed Iran’s steadfast support for the Kashmir cause.

According to a statement issued by the Inter-Services Public Relations (ISPR), the Army chief said enhanced Pakistan-Iran cooperation would have a positive impact on regional peace and stability. The Chief of the Army Staff and the Iranian foreign minister also discussed various matters of mutual interest, including regional security, Pak-Iran border management, and border markets.

Qureshi said Pakistan and Iran enjoyed historic and brotherly relations, and stressed expanding bilateral cooperation in areas of trade, commerce and security. He said restoration of peace in Afghanistan was vital for regional stability, with both sides expressing their resolve to continue efforts for ensuring peace and stability in the war-torn state.

The foreign minister also extended his condolences to Zarif on the loss of lives in Iran due to the novel coronavirus, and lauded the steps taken by the Iranian government to control the spread of virus. He also, on behalf of Pakistani nation, paid tribute to Iranian Supreme Leader Ayatollah Ali Khamenei for supporting the just cause of Kashmiris for their right to self-determination.

Both foreign ministers expressed concern over the rising trend of Islamophobia in certain European countries, stressing that blasphemy was not acceptable in the garb of freedom of expression.